"You take what is, and You make it beautiful ..."
-Lauren Daigle 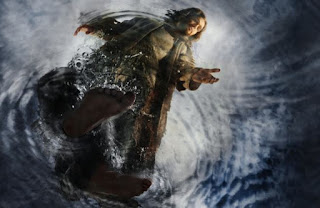 I  arrived at the hospital Thursday morning and started seeing the babies in my nursery. Most Papua New Guinean mothers don't name their children until they are a few months old, because so many of them die that they want to be certain the child will live before naming them. So baby-of Susan lay in her incubator, but I could tell she wouldn't last through the day. Born only 720 grams, she may have had a chance to survive in a country with Neonatologists, NICUs and fancy gadgets and toys. In a district mission hospital in PNG, I knew what would be coming for a few days. But each day, the baby lived and sister Sylvia and I prayed that we might, beyond hope, see a miracle.

Shortly after, the nurses got me for one of our patients who had been to the restroom and returned bleeding heavily. Pong had come to the hospital the previous day bleeding from a placenta previa. My history with this condition is terrible. Her bleeding slowed, though, and I had given her steroids to try and help her premature baby survive. After my previous experiences, I thought we could delay her operation and give her baby every chance to come out strong and healthy. But now Pong was bleeding again and I quickly performed an ultrasound. I could barely discern the flicker of a pulse in the baby's heart. I knew we would be too late. The operating team quickly took Pong to surgery, and while she survived, her baby died.

As I went back to the maternity ward, I noticed a nurse swaddling Susan's baby into wraps, preparing to send the infant home with her mother for burial.

I finished maternity rounds, too drained to collect all the staff together from their myriad tasks to say our usual morning prayers.
I went to the outpatient department deflated. 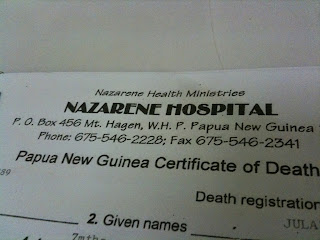 “I thank Thee that this Christian way whereon I walk is no untried or uncharted road, but a road beaten hard by the footsteps of saints, apostles, prophets, and martyrs.”
-John Baillie

A couple hours later, Grace came to my door. Grace and I first met two years ago, when she came to our maternity ward bleeding heavily in the eighth month of her pregnancy from placenta previa. She delivered her baby who lived in our nursery for a few days, but eventually died from prematurity.

I had to find Bill, my mentor, a couple times that day because I could tell my frame of mind wasn't the best to make some of these decisions. It became obvious that we needed to deliver Grace prematurely (again) by C-section (again) and pray that her baby would be strong and healthy. So I admitted Grace to the hospital, planning to do her surgery the next day.

In the morning, Grace and her husband Simeon were in the delivery room. I confirmed her diagnosis with lab tests and confirmed the baby's presentation with an ultrasound. Bill came to talk about our plan with Grace and Simeon and we prayed together that this baby would live. A few hours later, I recruited one of our surgeons, Dr. Ben, to help with Grace's operation. 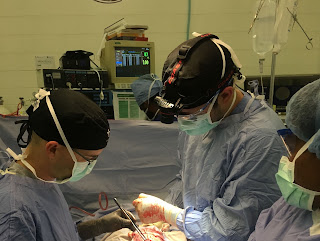 During surgery, Grace's blood pressure reached 210/120, but she had already received doses of medicines to protect her from seizures and she did well.
Her baby delivered crying and screaming, a small but vigorous boy.

I prayed that he would be able to feed and grow, and not succumb to being born early, like his older sister two years ago.

But the next morning I was terrified to walk into the hospital.  I remembered those seven stark reminders of patients who lost their earthly fights under my care.  I remembered the three babies we lost, including Grace's, a couple years ago from this same illness.  I thought about Pong, now recovering on the ward with no child because I didn't deliver her baby quickly enough.  I settled into my chair to read, trying to summon the courage to face the fate of this day.

I went to the hospital to see Grace's baby sleeping comfortably next to her.  He was small, but perfect in form.  As I finished rounds, Grace smiled broadly as she cradled him in her arms and nursed him.  Her husband Simeon found me later in the morning with tears crowding the corners of his eyes, took my hand in his and simply said, "Tankyu, Dokta Mark" 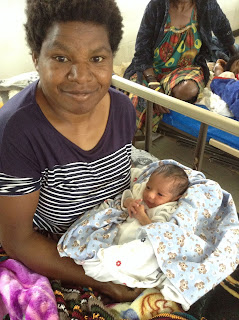 "With every morning light,
again we are redeemed."

A few days ago an older woman found me in the emergency room.  She had a baby with her and a gift of a new bilum (bag) that she made for me.  It was Grace's mother holding her grandson that I got to be part of bringing into the world several months ago.

We hugged each other and she gave me the bilum and I shook hands with this miracle baby.  Like I said, many parents in Papua New Guinea do not name their babies for a few months, because so many of them die.  But at 6 months old I assumed this little one had been named so I asked the grandmother, "Ol givem wanem nem long em?"

She smiled a bit wider and said, "Mark" 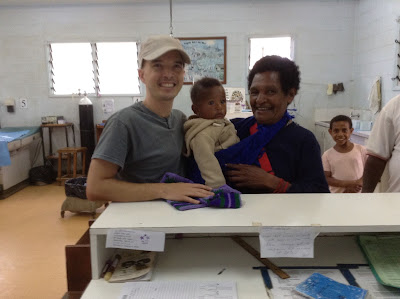