What do you do when you are at the end of your rope?  When you think you are out of options.  When you've tried everything but your circumstance isn't changing.  Around here I find myself praying and crying.

Most doctors in the United States or other more affluent nations never see a case of tetanus.  Universal immunization practices and prompt wound care have almost eliminated the disease there.  In Papua New Guinea tetanus still rears its head.

Lesley is a wonderful little boy about five years old who started feeling week several days ago.  Dr Erin saw him and admitted him to the hospital.  His father struggled to find a way back from Port Moresby, the capitol, and his mother needed to come from where she works in another part of the country.  A relative watched over Lesley in the meantime and Erin, Erik (our visiting student) and I pondered our limited options in treating Lesley.  Erin prayed for him and, though barely able to hold his small head up, Lesley prayed for himself out loud with her. 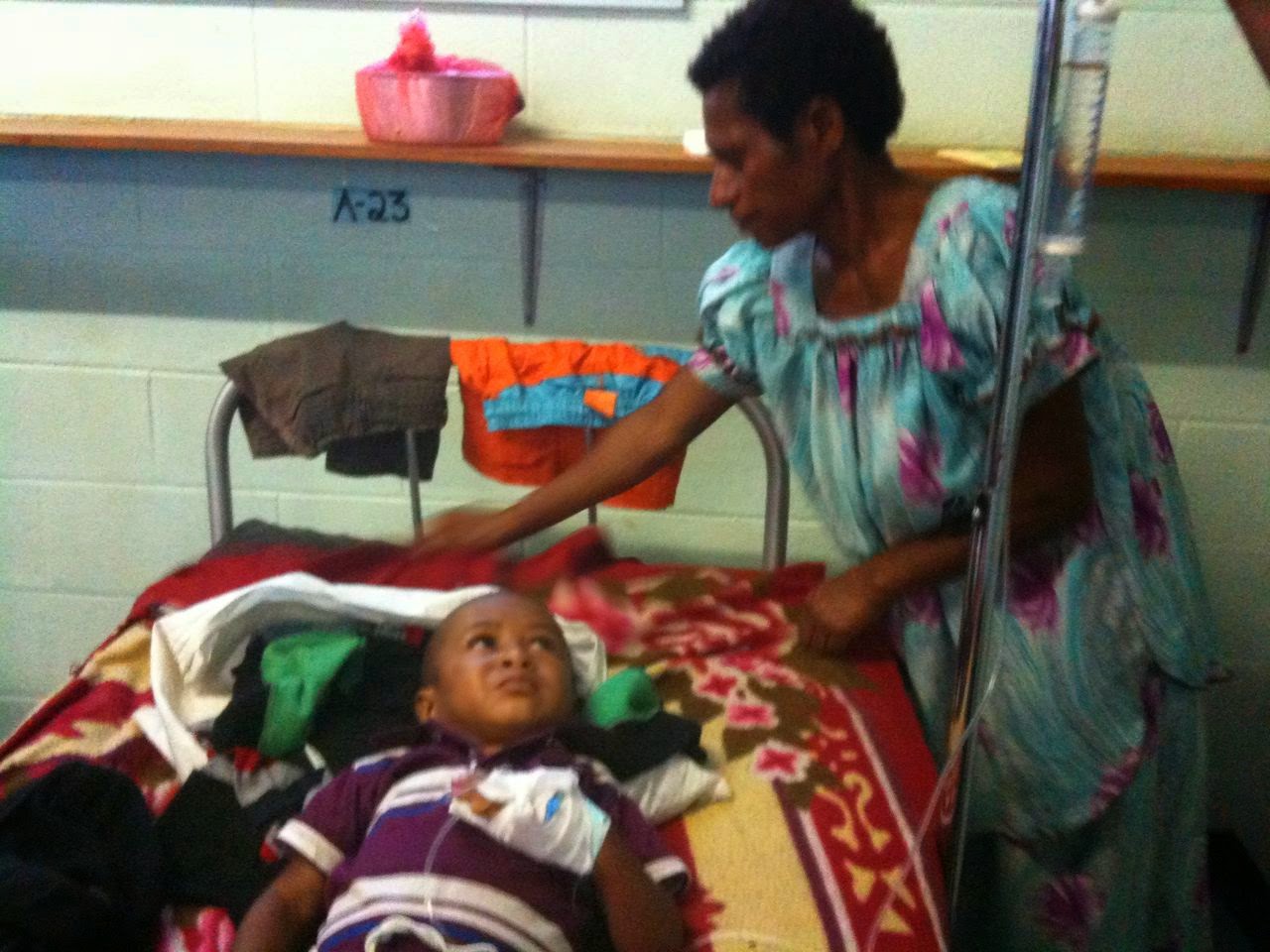 Lesley and his aunt

Over the next couple of days, Lesley wouldn't open his mouth, became progressively weaker and then developed spastic episodes.  He received multiple medicines to relax his muscles, was placed in an isolation room to minimize visual and auditory stimuli and his parents arrived to see their son having frequent fits.

Lesley's fits increased and the nurses called me to the ward because his breathing had labored.  I gave him valium and phenobarbitone while the nurses gave him oxygen. 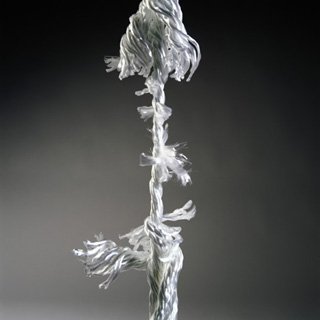 Before we moved to Papua New Guinea I warned Esther that a few months into it I might hit a wall.  Leaving home, missing family, a new baby, longer hours and long nights of call can wear one down.  Combine that with the emotional drain of seeing patients, especially children, that I can do little for and I feel like I'm on that last little strand of rope.  And my arms are getting tired ...

I've painfully realized that my hard work in medical school and grueling hours in residency, while giving me a useful skill set, haven't given me powers equal to these tasks.  Further, my emotional reserves are not enough to absorb every blow as patients suffer here.

But I also see that falling off the rope means I've nowhere to go - but into the supporting arms of God.

My flesh and my heart fail; but God is the strength of my heart and my portion forever.
-Psalm 73:26

So tomorrow I'll go back to the hospital.  I'll watch my pneumonia, asthma and trauma patients make recoveries and see my liver and heart failure patients get weaker.  I'll cry over Lesley's chart and, eventually, his death certificate.  And I'll put all my efforts on the cross, because in the end I don't have any more rope left.

But I trust, believe and feel that God will make a stronger man out of me than I am now.

I've worked on our pediatric ward for a couple weeks now and will continue there for another few weeks.  The sick children here tug at my heart - some in great ways and others in devastating ones.

Baby Wendy came to the hospital with cough and fevers looking like she had a bad pneumonia. 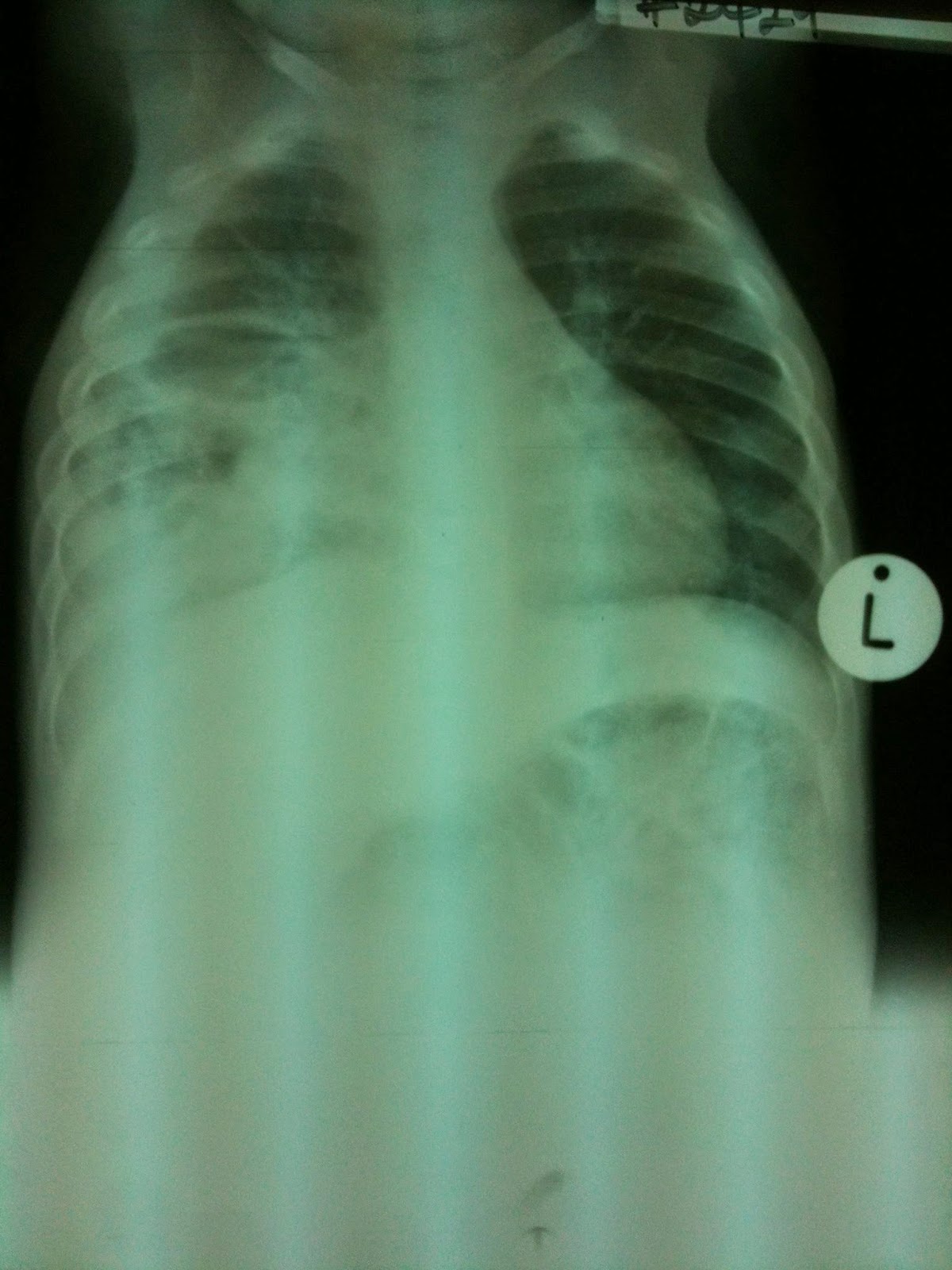 After a few days of treatment Wendy's fevers continued.  She wasn't as tired, but still had a bad cough.  Her following Xray looked like this. 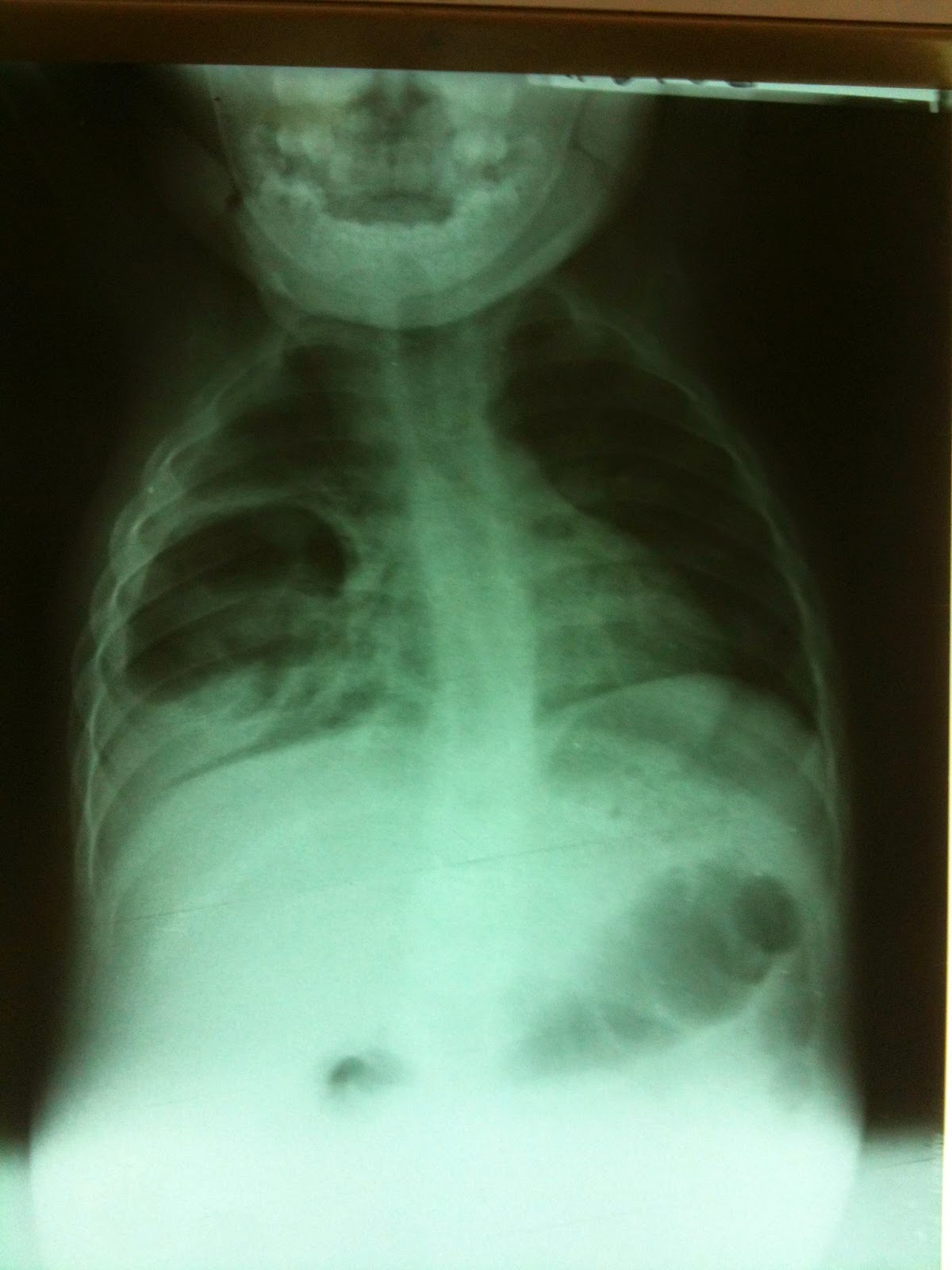 A few days earlier I had placed a chest tube in one the babies next to Wendy to drain an empyema (infected fluid around the lung) and thought Wendy might need the same.  But instead, she responded very well to TB medicine and came to see me in clinic looking better with the following Xray. 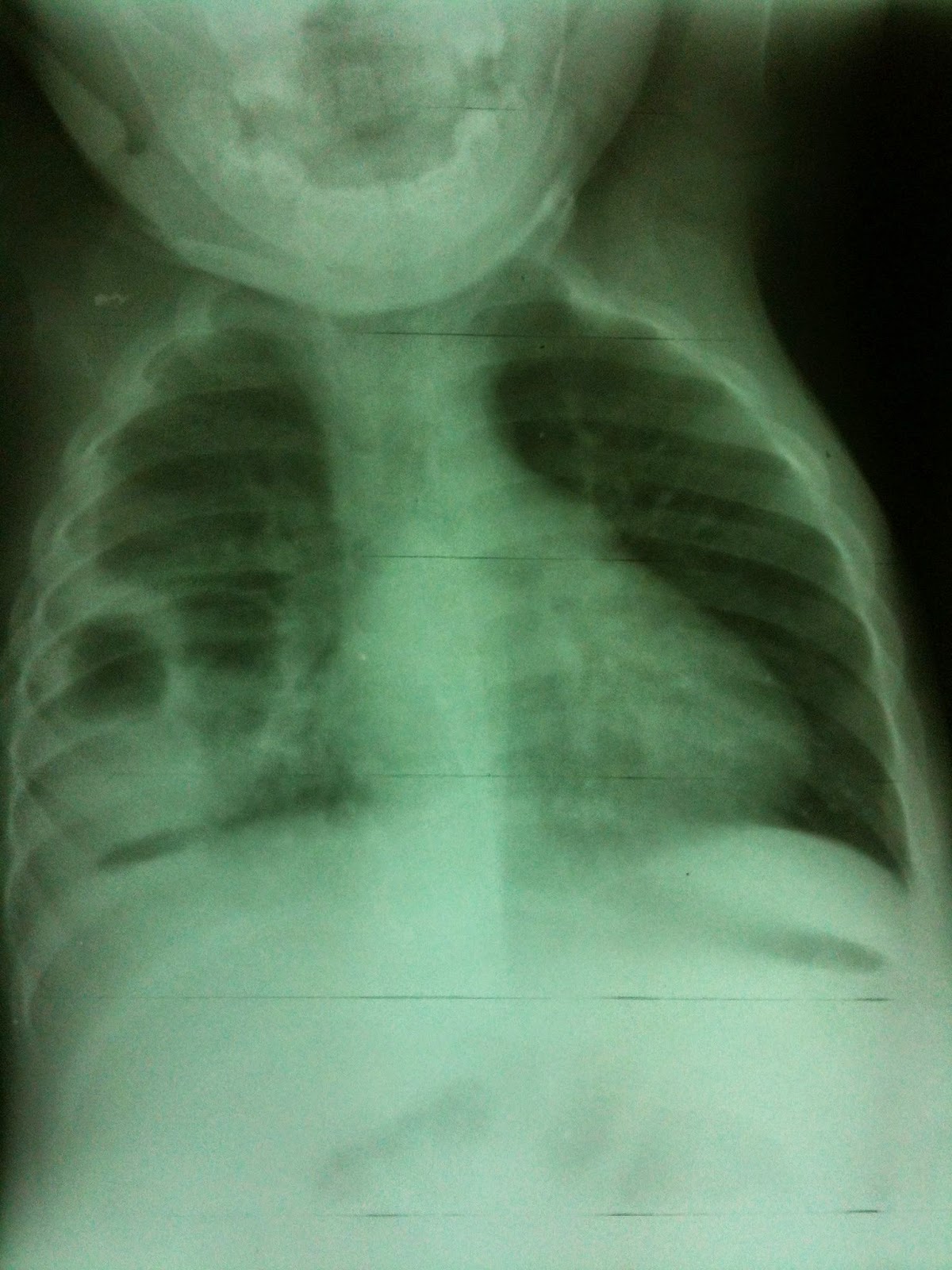 Although she felt better and her mother felt good about her progress, I couldn't get her to smile for the camera.  Lots of pikininis around here are afraid of the "white-man dokta" 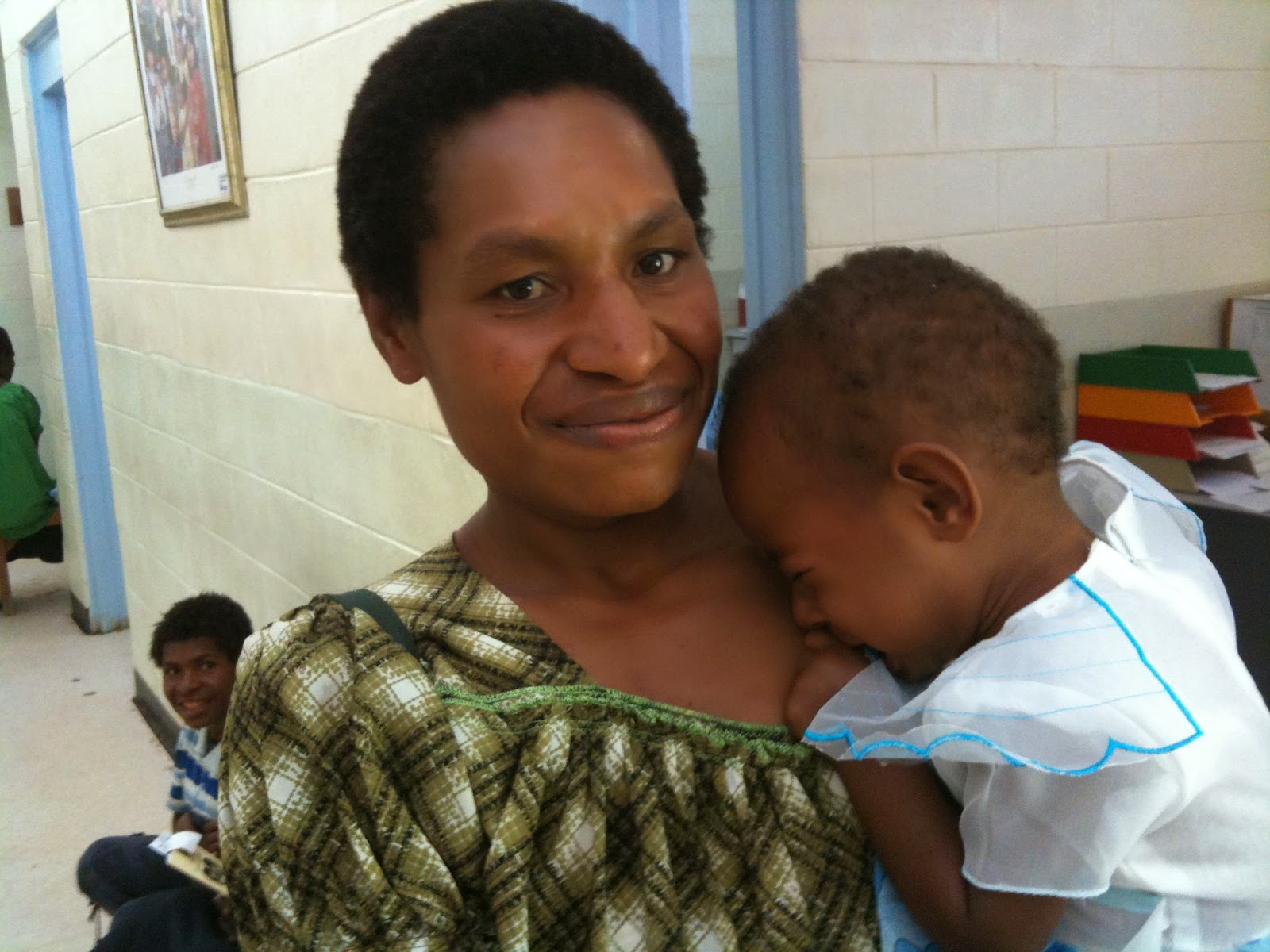 I love stories like Wendy's because in all honesty, three fourths of the patients we see at Kudjip have illnesses that we can treat and sometimes cure.  Many people and families are changed here and several receive care that saves their lives.  A few weeks ago I felt discouraged that three of my nursery babies died but Dr. Jim reminded me that had this hospital not been there for them, ALL of them would have. 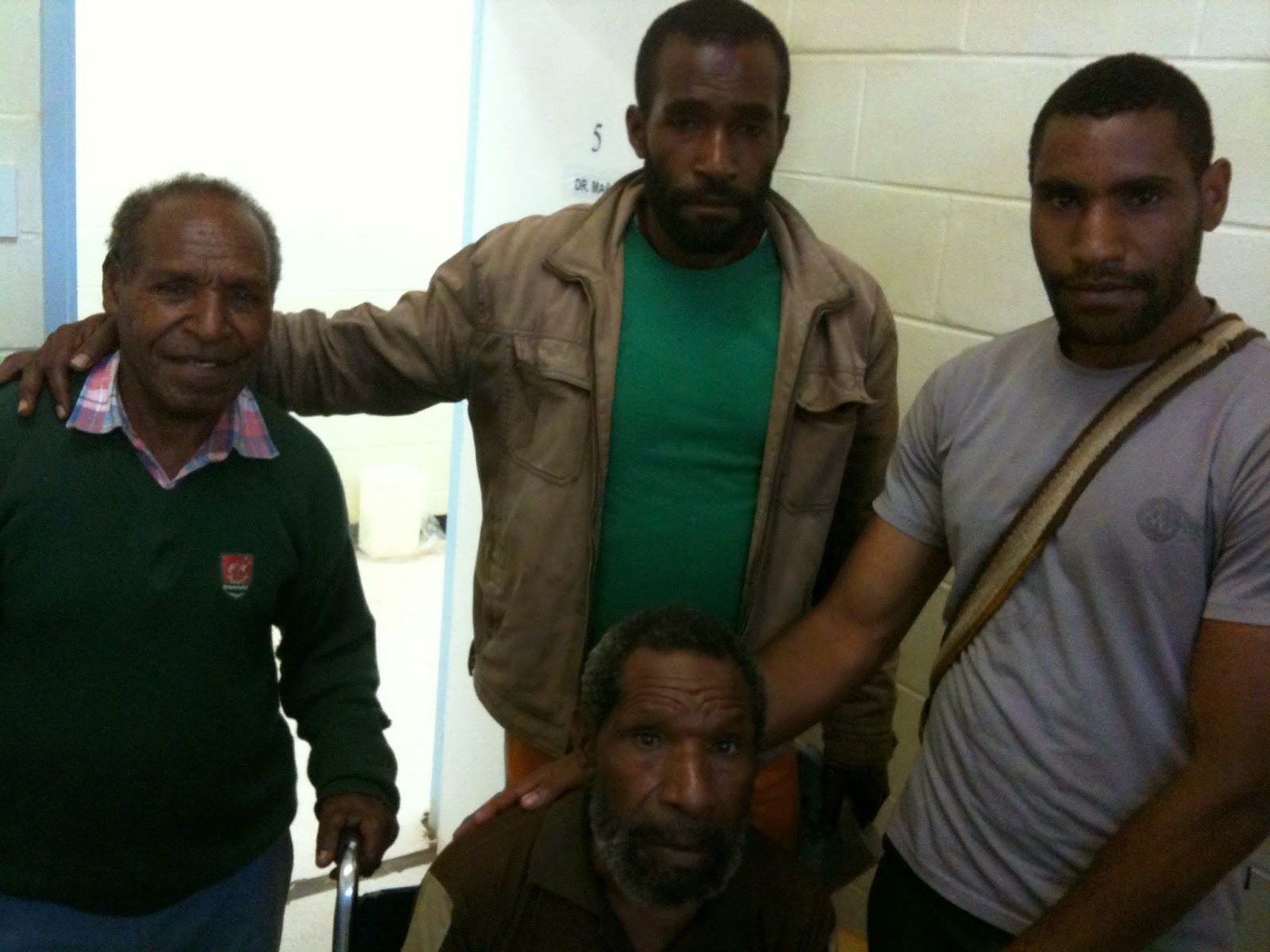 Several years ago Joseph suffered a car accident.  His spine and leg were broken in two places and never healed.  Now paralyzed, Joseph came to me to check up on his blood pressure.  His two sons accompanied him, along with a brother.  I didn't give them any good news.


Over time, high blood pressure changes the heart.  Because of the increased load, the muscles hypertrophy (get bigger) which overcomes the blood pressure but can make the heart so thick it doesn't function well.  Over time, this causes fluid to build up in the lungs and for the blood not to reach some of the vital organs it needs to, including the kidneys.  Joseph's heart couldn't keep fluid out of his lungs and his kidneys started to shut down which means he doesn't have many more months in this world.

His son on his left takes excellent care of him from what I can gather.  He is built like an olympian, probably because he pushes his father around in his wheelchair along the stony roads of Papua New Guinea and carries him in and out of it.  Over time, like Joseph's heart, his muscles grew to accommodate the increased workload.

Their story makes me think of the individual journeys God gives us to walk.  A friend of ours was recently diagnosed with cancer (actually, we are rather sick of cancer in our friends and loved ones).  I've found that God gives me the strength and grace I need for my circumstances but seldom much more than that.  I wish I could stockpile those some times, especially in Papua New Guinea.  But I think He prefers making me reliant on Him on a daily basis.

Joseph will never walk again barring a miracle.  He now faces a tedious battle against his blood pressure and heart failure issues as well.  But each day I believe his emotional and spiritual reserves will build.

I think that when we encounter challenges to walk through and endure, perhaps God delights in seeing us come out the other side looking like spiritual olympians.
Posted by Mark Crouch at 10:11 PM No comments:

Sometimes the hardest thing God asks us to do is wait, slow down, stop or stay.  My personal tendency makes me rush to the next patient, the next ward, the next project.  The great need drives me and I know that I have a lot of work to do.  But I look for one person, each day, that I feel I'm supposed to stop, slow down, wait and find out their real needs and hear their words.

My last night on call I was asked to see a patient on our medical ward in the middle of the night.  Metti is an elderly patient with pneumonia.  For some reason, she quickly deteriorated in the night and was extremely short of breath.  As I came into the ward I saw her gasping for air and sweating buckets.   Seeing her in such a state back in America, I would have put a breathing tube in her lungs and kept her on a ventilator until her lungs improved.  But in Kudjip, we don't have that option.

I gave her as much oxygen as I could, inhaled medicines, injection steroids and a shot of magnesium.  I walked to her and she looked terrified as I grabbed both her hands and shared the Gospel with her.  I prayed for her rather than with because she was so short of breath she couldn't even speak.  I went home.

The next morning I went back to her bed and found she was still alive, and breathing a little more comfortably.  She took both my hands in hers and put her forehead to them saying, "Mi tarnem bel" - "I've given my heart" and this time prayed with me through snatches of heavy breathing.

A few days later I went to check on her and found her bed empty.  It turns out that just hours after she clutched my hands in hers her shortness of breath worsened again and she passed into eternal life. 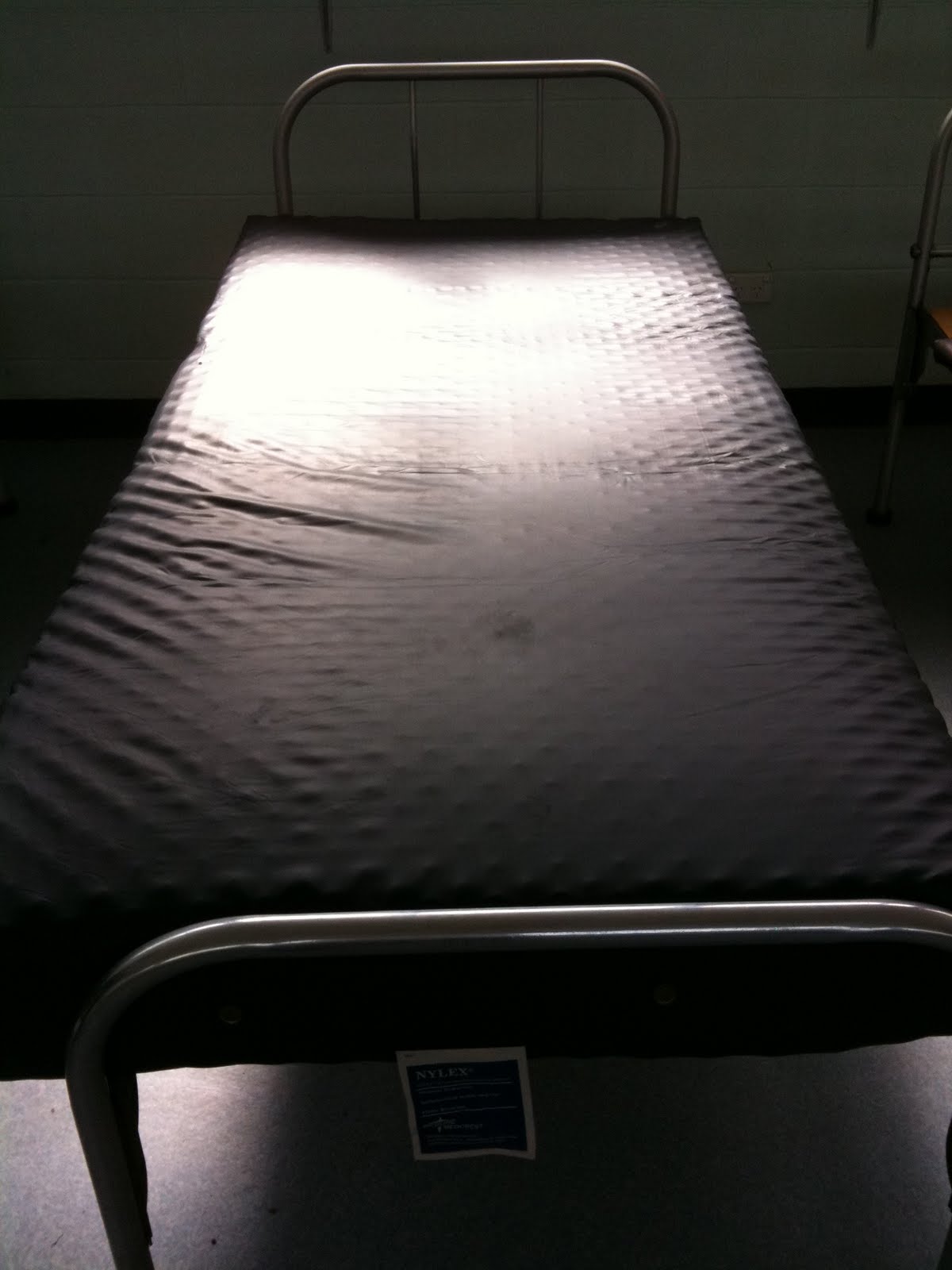 In Tok Pijin someone who is anxious or angry is said to have a "bel hot", bel meaning anything from stomach to heart.  Bel is a sort of catch-all word for describing a person's essence.  When I cry with a new mother as the two of us watch the nurses stop futile resuscitation efforts, I tell them "Yumi one bel" meaning our spirits feel the same.  In my first couple of weeks here I kept hearing people pray for a "bel easy" which I thought was nice, since I pray against worries and anxiety at home.

Some time later I realized that those who are praying are actually asking God to give them "bel isi" which is a little different.  When you want someone to talk more slowly, calm down, slow down, or wait you use the phrase "isi"

It's interesting that in the US where my culture races along at top speeds all the time, we ask God for peace, calmness and rest from anxiety.  At the same time, we hurry into everything around us - meetings, work and church.  In PNG, where the culture already slows a bit, they still recognize that what they really need is a "slow heart" and ask God for this.

In the book of Mark, Jesus heals a man who previously was so out of his mind that he lived in caves and cut and hurt himself.  When the man finds Jesus he is so excited he asks if he can follow him but Jesus actually says no - you can't go, you can't come, I want you to stop and stay and tell others.  "Makem bel isi" 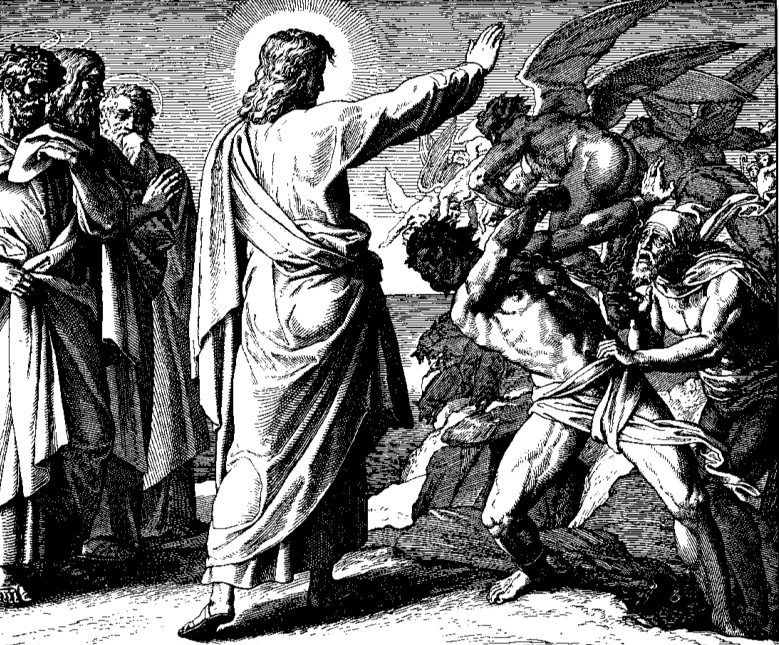 "Go home to your friends, and tell them what great things the Lord has done for you and how He has had compassion on you." - Mark 5:19

This nameless healed follower of Christ stayed home but told others of the great things God did for Him in compassion.

I hope that when God gives me one specific person to help and to change, that I won't be so rushed to miss it.  That I could slow my day on their behalf, and see His compassion do great things for them.

-Mumford and Sons
Posted by Mark Crouch at 7:27 AM No comments: