"Jesus replied, 'The Son can do nothing by himself.
He does only what He sees the Father doing,
and in the same way.'"
John 5:19

On Tuesday afternoon we finished seeing our outpatients a little early so I went to the emergency room to find out if I could help there.  A young man lay on the center bed with his leg in a crudely made splint and a bloody bandage over his knee.  I asked his father standing over him what happened.

The night before, he had been riding his bicycle when he was struck by a vehicle.  The family members quickly took him to a nearby hospital.  Unfortunately, all of the doctors from that hospital had walked off the job, and the nurses did so the next day.  As a result, his open leg fracture was treated with just some gauze and a crude splint, rather than any kind of stitches or reduction or surgery.

As I explored the wound and saw bone and tendon damaged, I worried he needed surgery.

I always cringe when a patient needs surgery, because I know how hard our surgeons, father-son Drs. Jim and Ben Radcliffe, work every day serving the people of Papua New Guinea.  I know Jim had heart surgery last year.  I know Ben has newborn twins at home.  I know they both have big hearts and struggle to see people suffering with a problem they can solve, yet still draw a line protecting their own time and energy and families.

I hesitantly asked Ben to take a look and tell me if I could drain and splint the wound.  He was on his way to the emergency room already, preparing to repair a limb injured by a bush-knife during one of the many fights in our area.

Unsurprisingly within 30 minutes, both Jim and Ben were putting together broken bodies in our emergency room, like they have so many times before, working into the late afternoon and evening again.  Seeing the two of them in tandem struck me.  A snapshot of this verse from John. 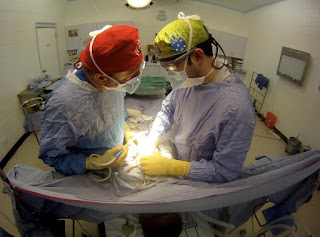 I don't know what is around the corner here.  I know that in a few days, Jim will go home and Ben will be alone, carrying the surgical burden of hundreds of thousands of patients here in the highlands.  I know that we have three doctors on furlough and that the four of us left will see many more patients, deliver many more babies, and take more call than usual.

But I know that God has protected the ministry here.  I know that folks at home will pray for and love us at distance.  I know that those with broken and hurting lives will still come through our gate and doors.  And I pray that we can have discernment to see how we can still make a difference, and the stamina to help those who need us most.