"What will happen next?"

Today I visited with a patient in our clinic for some time.

On the 5th of February, a relative thought that Koki was being unfaithful to his wife.  His sister-in-law became enraged and attacked Koki with a bush-knife.  He suffered several knife wounds, losing part of his hand and breaking bones in his foot.

The bush-knife pervades society here, and even children as young as four or five will carry small ones.  The nurses in the emergency room  created the acronym "BKW" which means Bush-knife Wound, because they see them so commonly.

Unfortunately the other thing that pervades society here is revenge.  Any attack potentially begins a tribal or "line" war.  In Koki's case, his son, Tony took matters into his own hand and killed the woman who attacked Koki.  Now Tony occupies a cell in the nearest prison awaiting Kot, or trial.

Around here, what comes next is anybody's guess.  Tony might pay some compensation.  He might have to live in prison.  He might be released and later fall victim to yet another revenge killing.

The past two weeks have seen healing come to Koki's body, but I spent most of my time speaking into his heart.

When I asked Koki what will come from all of this he wasn't sure either.  Koki has attended church, and most people from PNG love Bible stories.  I went through the story of David and Saul - that David would not take matters into his own hand against Saul when he had him at his mercy, even though Saul had tried to kill David and hunted him in the wilderness.  Koki nodded and seemed to understand.  I asked him what he thought the story meant.  He said that it was not our place to take Kot into our own hands but leave it to God.

"Let the Lord judge between you and me, and let the Lord avenge me on you.  But my hand shall not be against you." - I Samuel 24:12

What if Koki had understood and learned this lesson years ago?  What if he taught Tony that lesson when he was younger?  Would Tony be a free man?  Would a now murdered lady still breathe and walk among us here at Kudjip?  I don't know what could be - and I don't believe God intends that we should ever know what might be different in our lives if circumstances changed.

But I believe He has placed me here for a reason.  The more I see the victims of revenge and violence here, the more compelled I am to urge them to Peace.  The more my heart breaks for my patients.  The more I fear for those I may see in a week or a month from the same tribal fight.  The more I wonder aloud in my prayers, "What will happen next?"

Posted by Mark Crouch at 3:54 AM No comments: 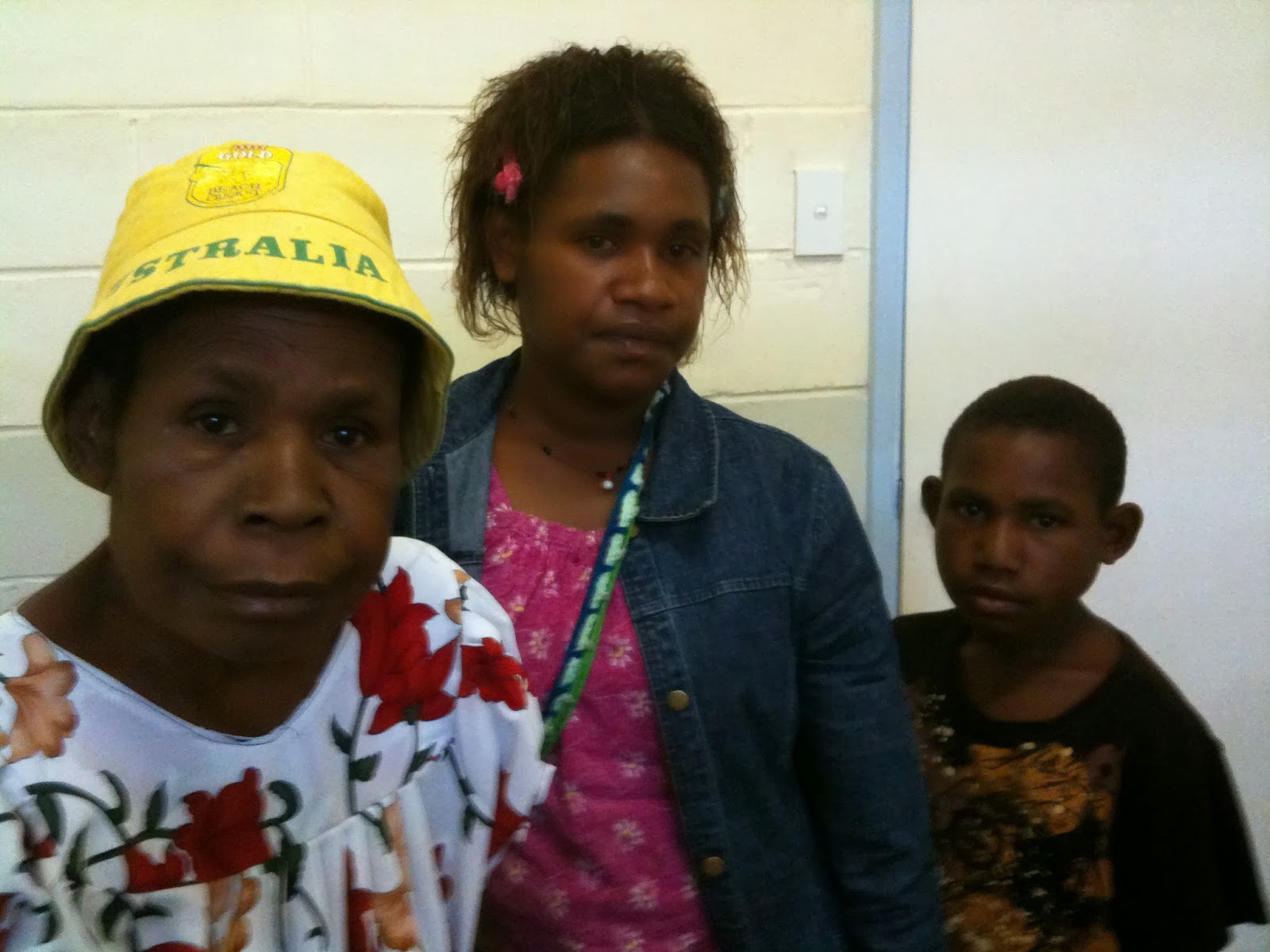 
Meet Rachel, her daughter Jennifer and her son Jeremiah.  Rachel brought up five children, and Jeremiah is the youngest.  All of her children live close to her, which is good because Rachel is dying.
A few months ago, Rachel was admitted to the hospital with congestive heart failure.  Her heart doesn't pump blood properly, probably from years of untreated hypertension.  Because of this, she gets short of breath anytime she walks.  Now her kidneys are shutting down.  When she left the hospital, her creatinine level was 7 and now it is 11, for those medical folks out there.
I told Rachel this week that she was dying when she came to see me in clinic.  Jennifer cried.  Rachel said that she felt something was very wrong but didn't know how serious it might be.  She trusts God and believes in Jesus as his Son.  I cried and prayed with this family - my first prayer in Tok Pijin.  Then I saw the next of dozens of clinic patients, many who are like Rachel.

Dr. Bill McCoy wrote a book called Until We All Have Names some years ago describing the plight of some of his more memorable patients working in Swaziland and here at Kudjip.  In it, he points out that the broken and suffering peoples of the world are often nameless, which I touched on in my last blog.  But God knows each of their stories.  Though Rachel's story will end sooner than most, He has allowed me to see into the lives of her and her family.  And there are many more.  For the privilege of putting names to those lives, I am grateful. 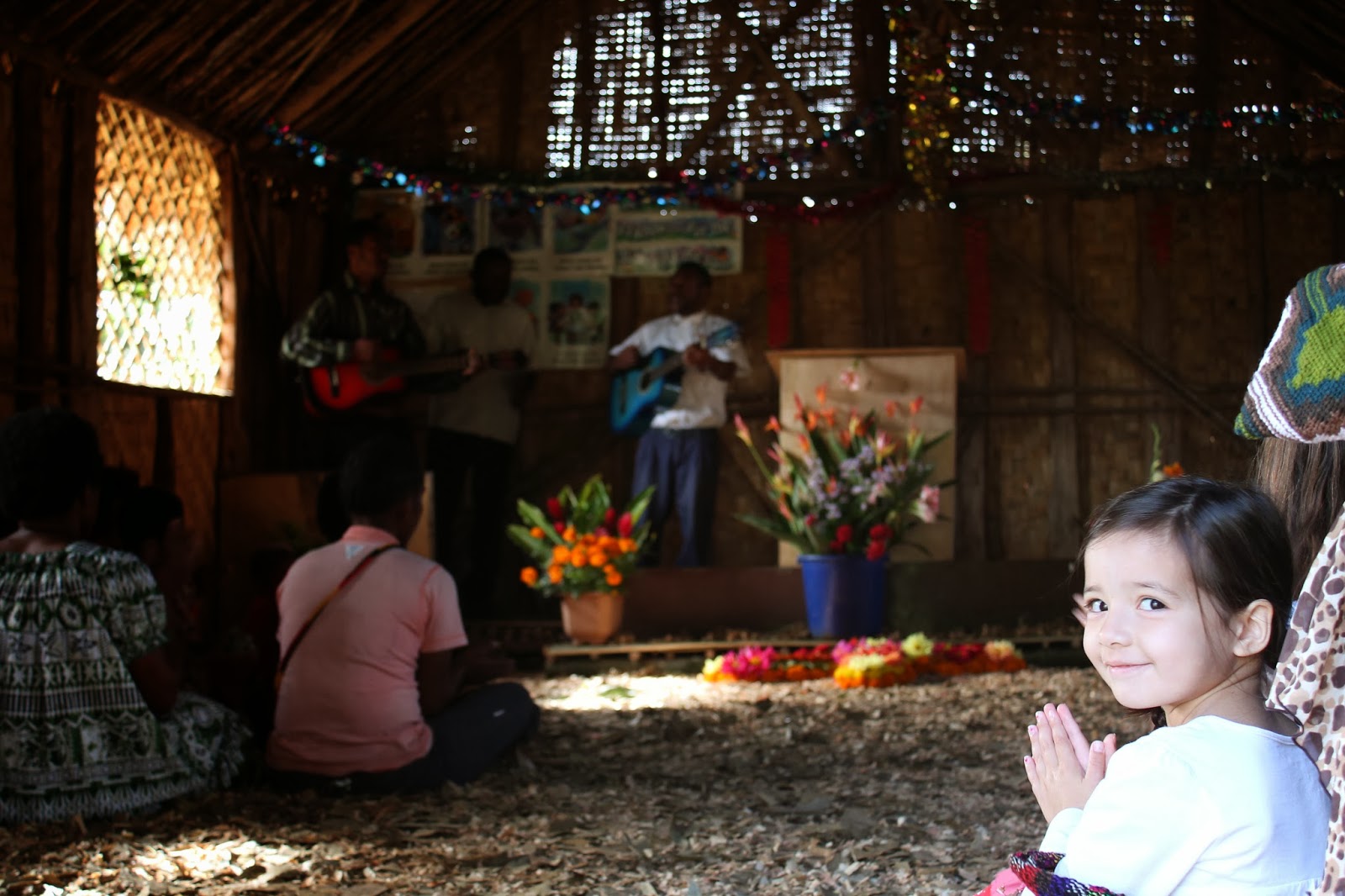 Anna at the orphanage outreach church

Last weekend Anna and I attended Lotu (church) at a nearby Orphanage.  Dr. Jim (Kudjip's surgeon) preached a very good sermon in Pijin and played the trumpet while his wife acted out the Hannah and Samuel bible story.  Did I mention their children Josiah and Lydia played the guitar for worship?  I will be having a serious discussion with God about the distribution of talent when I get to Heaven.  Anna and I enjoyed the service, which took place in a grass-hut church in the mountains just off the Highlands Highway.

After this, we came back to Kudjip for English Lotu, a once-a-month all-English church service put on by the staff here and attended by many of the expat missionaries in the surrounding areas.  It helps that a potluck lunch precedes the service, which our family gladly took part in. 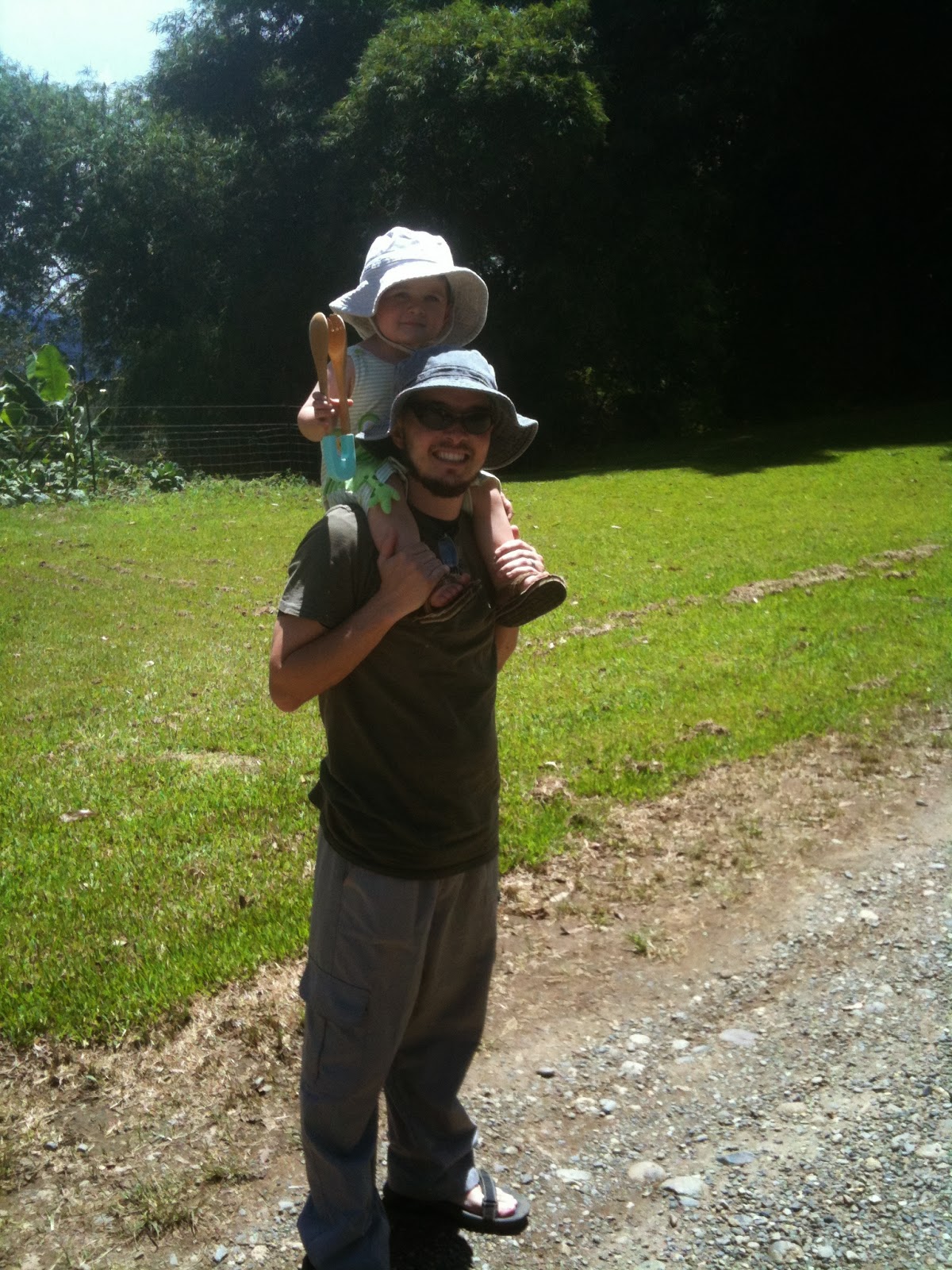 After Levi's attempt to perform salad-tong Cesaran on Esther, we restricted him to the wooden variety

Some things I love, and one of them is when a child I really worried about improves and gets read to go home.  I wrote about Steward, a 13-month old boy who spent much of his life sick.  He came to Kudjip about ten days ago deathly ill with fever and what looked like meningitis to me.  Turns out Steward had a bad pneumonia and likely has pulmonary hypertension, explaining his recurrent bouts of respiratory issues since his birth.  Dr. Susan Myers at Kudjip trained as a Pediatrician and has good skills with ultrasound in children as well.  She identified Steward's condition and started him on medicine for his heart and he has finished his antibiotics.  Now he eats, drinks, pees and poops normally and may be able to wean off oxygen and go home in the next few days. 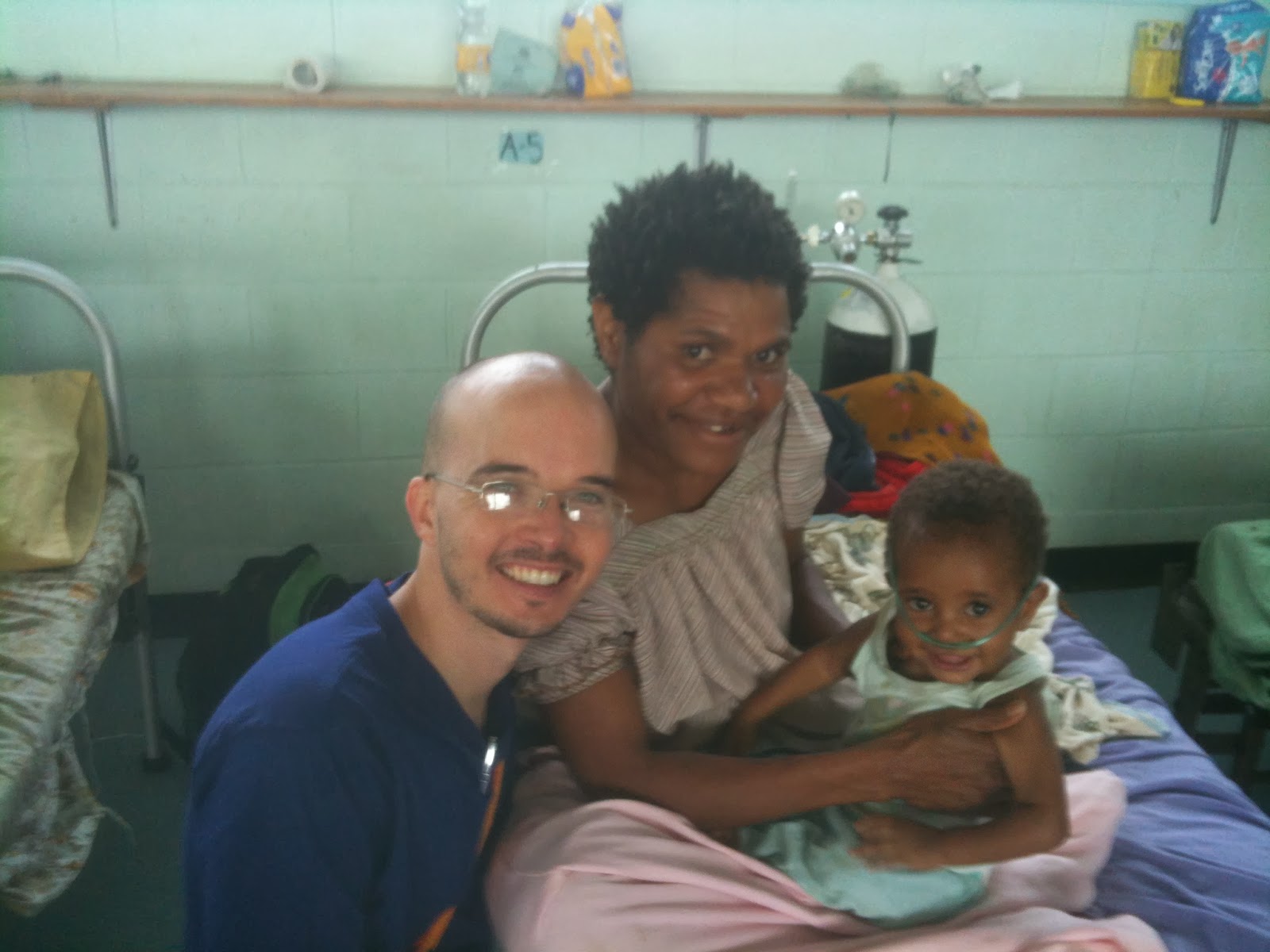 I also love healthy moms and healthy babies.  Magdalene delivered her baby on the 6th.  She experienced a retained placenta which needed manual removal resulting in a large tear.  But her baby boy thrives and she feels well enough to go home.  She gave me a bilum (bag) as a gift for delivering her baby.  During the delivery process she prayed for strength from Jesus for herself and even for me.  I feel blessed to have been there for her and her baby and will proudly wear my bilum to and from the hospital now! 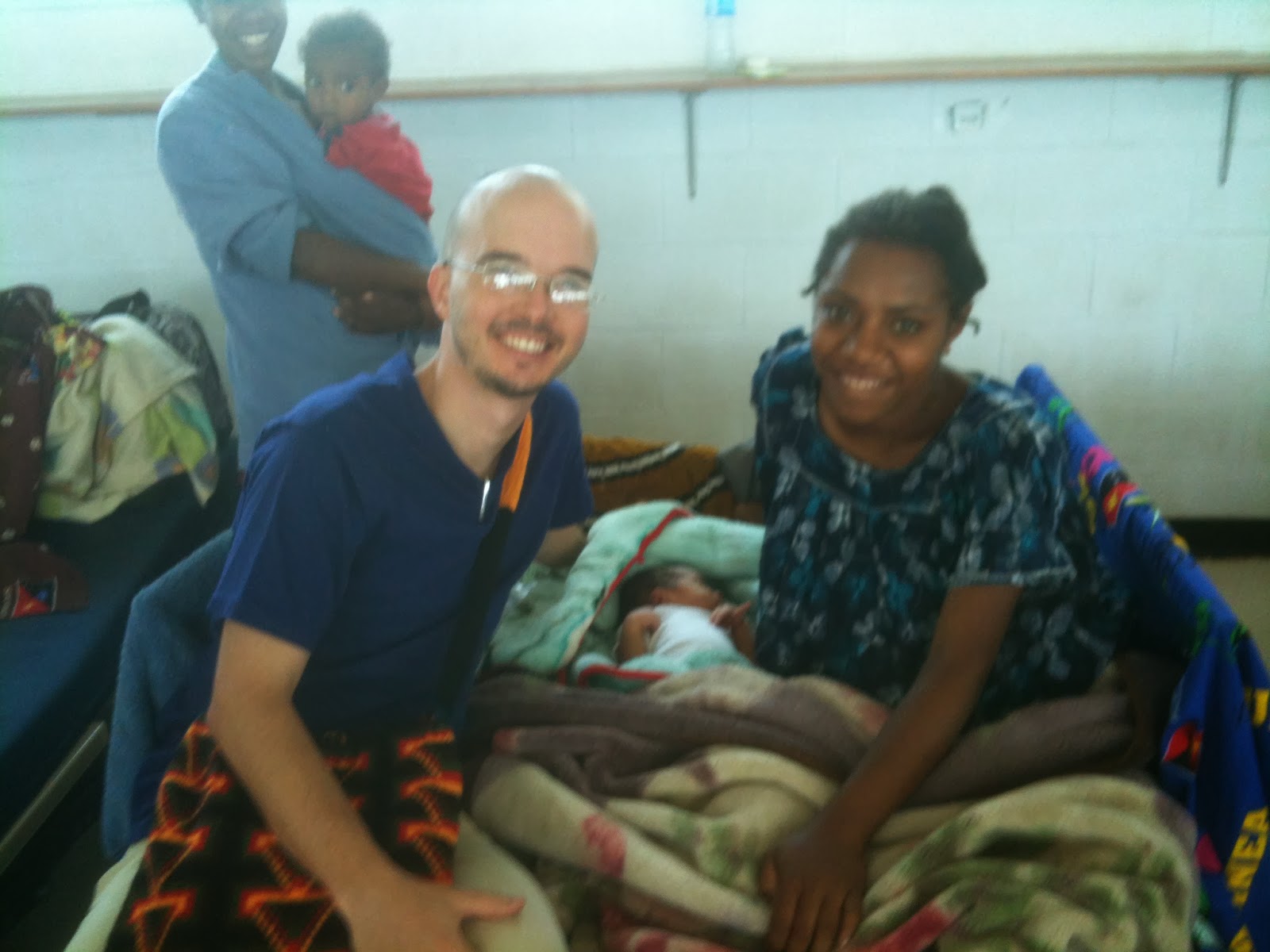 Please pray for my confidence and trust.  I love seeing the moms and babies that we can help here, but my heart breaks for each of the babies we lose due to prematurity, congenital defects or neonatal infections.  I also struggle with wanting to control many of the small things in my patients.  But I know that ultimately my obedience to God and service to Him and to them makes a greater impact than my medical knowledge in this place.

Thank you for joining us in this adventure with your prayers, your thoughts and your generous giving.
Posted by Mark Crouch at 10:58 PM No comments: