Anyone who knows me knows that I don't like to lose. But today was a day of losing.

I'm halfway through my call and I've already had more than my share of loss and frustration. Most relates to the recent departure of Dr. Scott Pringle, our visiting OB/Gyn physician. Now that he's gone, the OB calls are coming fast and furious. At Kudjip, the doctor is not called for routine, happy deliveries. They are called for problems. I guess that's what I get for wanting more OB exposure.

My first call to OB brought me to a young girl who was about 5 months into her pregnancy (21 weeks). She had contractions through the night and was already dilated in active labor. Dr. Stephanie was already in the OB ward so we gave salbutamol. But she was already on her way to delivering. Her baby was born prematurely and lived for a couple hours in our nursery.

A little later a woman presented to the OB ward in labor. This woman had 9 months of pregnancy completed (fantastic) and was fully dilated ready to deliver (also very good) and had 3 previous successful deliveries (great). But her baby's heart rate sounded out at 70 bpm (normal is 110 to 160). Ugh. She did better on her side, but would not tolerate pushing so we took her to the OR for a Csection. Then all of those promising signs from her arrival vanished.
Her baby had hydrocephalus and frontal bossing when I delivered the head, and turned out to have dwarfism when I delivered the rest of the baby. As Dr. Stephanie went to resuscitate the baby, I was left with a uterus that seemed to bleed with no stopping in sight. As the mother's heart rate climbed towards 140, Dr. Stephanie was instructing the nursing staff caring for the extremely sick baby. I'm very grateful that God gave me steady hands, even when very nervous or scared. I was able to finish the Csection while Dr. Stephanie helped intubate and ventilate the baby. (I am convinced this little one's heart had a significant defect, because the baby did not survive beyond 2 hours after delivery). My heart sank as I scrubbed my hands and left the OR.

These things tend to happen in 3's, and today was no exception. As soon as I returned to the ER the ER nurse showed me a baby that just arrived. She had been delivered at home 3 days prior when the mother was about 6 months into her pregnancy. The baby did not feed well and had only shallow breathing and a faint heartbeat. I felt compelled toward this child, having seen two pass away already. This baby is now in our warmer with oxygen, a feeding tube, IV fluids and sugar, antibiotics and respiratory medicines in an effort to stave off what increasingly seems inevitable around here. 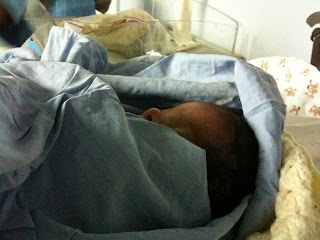 One of our newborns who did not survive day one

One story that has been extremely important to me in the past has been the story of David's first child born by Bethsheba. Because of David's sin, the child became ill and David prayed and fasted for his recovery. When the child died, his servants were afraid that he would become despondent. Instead, David cleaned himself up, ate, and worshiped God. They asked him how he could do this and his reply has been an important life lesson for me as I take care of the sick and hurting:
"While the child was alive, I fasted and wept; for I said, 'Who can tell whether the Lord will be gracious to me, that the child may live?'" (2 Sam 12:22)

We often ask how God could be good, powerful and care for us in the face of suffering like this. I used to wonder that also - and theologically, I have my ideas. But when I see the grief of mothers who have lost their children, my theology seems less important. I find myself asking what David asked, "Who knows? Perhaps the Lord will be gracious." I've come to appreciate that I don't have to explain God's doings, the "why's" behind the things that happen in our world. I believe that He is good, and because of that I trust Him - in spite of my own failures at times in bringing healing to those He directs my way. Because of His goodness and that trust, I can have peace. That doesn't mean it is all taken lightly. Quite the contrary. My burden is to see the suffering without having to justify it, and to hope that I may yet, sometimes, be an instrument of His grace.
Posted by Mark Crouch at 1:40 AM