Today I was able to follow in the footsteps of one of my heroes.

Dr. Paul Brand was a British orthopedic surgeon who worked at a leprosy hospital in India for many years. During his time there, he developed a technique of serial casting to treat contractures and other bony deformities that occur from disease or congenital defects. Esther and I read about his time in India and his reflections on his lessons learned in a phenomenal book that everyone should read called The Gift Of Pain.

His work led to the development, about the same time, of a set of manipulations and serial casting techniques called the Ponseti method. This practice has led to dramatic changes in the lives of children born with congenital club foot.

Today was my chance to see this, and practice it, first hand.

2 patients came to the clinic today with club foot. One was a 3 year old boy who had no previous treatment and had already developed an ulcer on one of his feet from walking on his overly adducted tarsal bones. 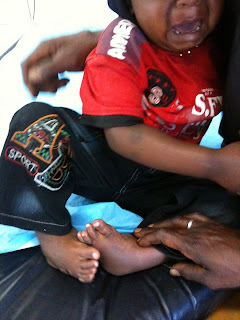 A 3 year old with untreated club foot
The other was a 2 year old who is on his 10th week of treatment with some good results toward correcting his deformity. Dr Rosie let me watch and assist with this child's casting, and perform the manipulation maneuvers and cast the 2nd leg. It was a definite treat - probably one of the highlights of my being here. These patients will now be able to walk - and create footsteps of their own for their children to follow in. 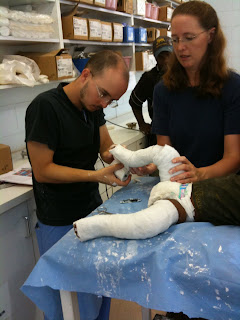 Casting a boy with club foot - an exciting first for me

After work today, I discovered that Anna is becoming a little more adept at tree-climbing. At least, she can now hang suspended from a branch momentarily. There were several instances today that I couldn't believe how grown up she is. We now have a 2nd baby on the way and it is hard for me to imagine her being a big sister ... even though I know she will be great at it. 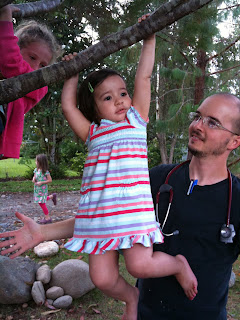 Anna goes spider-man on the tree outside our house

Unfortunately I did a pretty good number on my ankle today while playing soccer with some of the college of nursing students. The missionaries usually play American football, which I did for a while. I like to have a few minutes of soccer though if I can get it, and today I really should have gone straight home for dinner. My ankle is not swollen, but it's hard for me to remember a sprain that was this painful during the first day after injuring it. It wouldn't bother me much, except that we are going to be making the long trek home in about 3 days and I will need to be able to bear weight, and extra weight, for that journey. If you are running out of things to pray for here, please add my ankle to the list.

I may have another post to add before leaving. It will probably be something of a debrief. So much has happened, and it amazes me to know that it will go on happening here after we are gone. I don't know if Kudjip is part of God's plan for us in the future, but we will treasure our time here forever and have very fond memories of it.
Posted by Mark Crouch at 2:39 AM