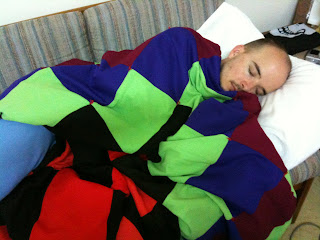 Catching some Z's on the couch in my retro quilt while waiting for calls
Thursday was another day on call. Slightly less traumatic than my previous. In fact, I only had a couple times to go down to the hospital. One for a young man who collapsed somewhat out of the blue ... who looks to have some form of heart disease. An echocardiogram (ultrasound of the heart) would be very helpful. Well - an echo with a cardiologist to read it. We also got a lady who came into the OB ward in labor, roughly 34 weeks along (about a month early). She was not far into her labor and was able to complete a dose of steroids which will help her baby's lung mature.

Friday was a busy day but in many ways very good. Our pediatric ward saw 3 or 4 patients improve and go home. A young lady named Sandy who has a brain abscess was stabilized this week. During my last call a week ago we came to the ward because she stopped breathing, but recovered during the week. She is still very sick and will need a miracle to return to the cheerful girl that said "Apinoon, Dokta Mark" a couple weeks ago.

I have been doing more Csections this week and Friday I got the icing on that cake. I performed a Csection on twin babies without complications and with two pretty health looking babies at the end of it. That procedure gave me a nice shot in the arm after such a difficult day in the nursery last weekend. 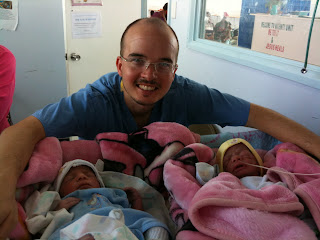 Twins a-la Crouch
Pray for our little girl on the right who may have some congenital defects
Saturday I experienced a wokabaut. Dr. Bill has been into the mountains around Kudjip a few times, but not in the past year or so. He agreed to take me on a "hike" through the mountains despite the fact that he just finished call the night before and had a sinus headache. He also put me to shame on the mountain - bounding and running on slopes that I thought might be the death of me. We started out near the station and went up the Kane (pronounced Kon-yuh) river into a gorge and up Las Mountain (Last Mountain). The terrain didn't remind me at all of some hiking I've done in the Rocky Mountains. Imagine the TV show Lost - thick jungles covering steep mountains. There is no way the characters in that show would last more than a week. We went through some serious bush country. As I write that, I have to admit that our "guides" for this hike were 4 boys from the local village who couldn't have been older than 10. They made this mountain look easy enough - but when two of their girlfriends showed up I was even more embarrassed to be huffing and puffing along this jungle path into the mountains. But once we reached the summit and had lunch looking out over the station in the distance, it was definitely worth it. 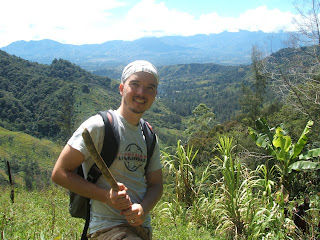 Las Mountain
That speck of tin next to my eye in the background is Kudjip Station
On our way back, we had a nice dip in the Kane which turned out to be freezing cold. We also discovered an outdoor prayer chapel up one of the nearby ridges. 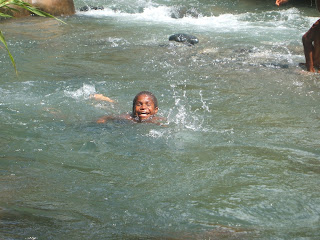 One of our guides taking a dip in the river
It was such a refreshing trip. At times it felt we took our lives in our hands going up narrow jungle paths along the mountainside. But looking out over the valley and discovering the serenity of the chapel with naught but the sound of the river disturbing the quiet was very comforting. Many of the difficulties and failures of the previous week seemed to roll down the valley along with the clouds as we looked down from our perch. It reminded me of David in the wilderness being pursued by Saul. He had every reason to forget God, to dismay and become a recluse never inheriting the promise of God's kingdom for him. But he turned his moments of solitude into moments of refuge and composed some of the most thoughtful reflections on God's feelings towards us in scripture. 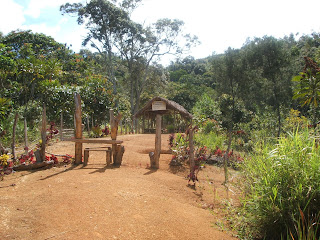 Prayer chapel near Las Mountain
I'm very grateful for the time that we've had in this place. The hospital and the medical experiences are one thing, but being able to "un-plug" for a while has been very good also. Admittedly, I miss the chances to spend time with friends and family, to watch a good soccer game, to "run down t'pub" for fish and chips or a brew - but this place has other treasures that are hard or impossible to find at home.
Posted by Mark Crouch at 12:44 AM