"Launch out into the deep and let down your nets for a catch"
-Luke 5:4


I got the phone call at about midnight late Sunday.  The previous day I was bumped and jostled up the highlands highway returning from the national medical symposium 9 hours away on the coast, so I was a little sore.  The calmness of the voice on the other end of the line clashed with the message delivered.  "Doctor, your C-section patient is in arrest."

I flew out the door and up to the hospital.  It didn't make sense - her surgery had been fairly routine a few hours before.  Her baby simply wouldn't come vaginally so I took her to surgery and delivered a big, vigorous baby.  But when I arrived in the ward, there she was without breathing or pulse, receiving chest compression from a nursing student while an anxious family looked on.  I quickly placed a tube in her airway while nurses prepared drugs to try and restart her heart.  After several minutes and rounds of exhausting CPR, she had a pulse.  One of our anesthesia officers arrived to help but she kept losing her heartbeat so we started a continuous infusion of adrenaline to keep her alive and took her back to the operating room, allowing our ventilator to provide artificial breaths while we tried to reverse whatever happened to her.  Did she get too much anesthesia or pain medicines?  We reversed it.  Did she bleed too much?  An ultrasound of her abdomen suggested no.  What happened?  After many hours being kept artificially alive, her body eventually wore out and she passed away - her cause of death shrouded in mystery.

I got some hurried breakfast and went back to the hospital.  Only hours later another mom came to the delivery room who had been laboring in a bush health center without any progress, awaiting a car's availability to bring her to Kudjip.  Her baby was clearly obstructed in her pelvis and she needed surgery.  The nurses had reported a strong fetal heart beat before surgery, but it became apparent they had detected the mother's pulse.  I delivered a baby that seemed to have died some time before.  I put the last stitch into my patient's skin and went on to clinic, preparing to work my way through a steady steam of the destitute sick of Papua New Guinea.  I was mere hours back into work and I was already feeling drained. 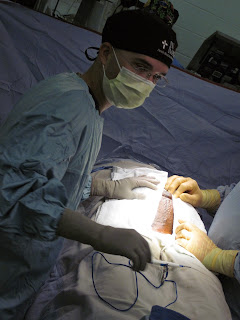 After an invigorating time teaching at the PNG national medical symposium, I returned to the maternity ward at Kudjip.  For the past several weeks, I have experienced the highs and lows of helping deliver babies in a country that struggles with some of the worst maternal and perinatal mortality rates in the world.  And it felt like I was losing the never-ending battle against them.

Some years ago my mentor, Dr. Bill, shared about his journey through the perils of trying to save the world through medical missions.  He points out the story in which Jesus encounters Simon.  After a long night of fruitless toil, Jesus asks him to help him teach the people.  Simon likely didn't need to be there, but I believe our Lord saw something that he needed to learn.  Scripture doesn't actually give us the sermon - but his message comes through loud and clear when he asks Simon to go out into the deep waters.  The waters where had just spent hours of work with nothing to show for it, where he had just failed - where he lost.  Although he was ready to give up, his response motivates me every day:

"Nevertheless, at your word I will let down the nets." 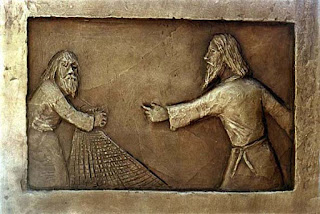 "Doctor, the baby's head is stuck."  Once again, I raced up to the hospital, convinced that this baby would die in those hurried moments as I made my way up the stony road.  When I arrived at the delivery bay, I saw a nurses clutching the body of a baby in her arms, the head still inside its mother's womb.  Without any antenatal care, this breech (feet first) presentation had not been detected until the mother arrived at Kudjip ready to deliver, with the baby being partially born immediately after she laid on the delivery bed.  As I worked to relieve the obstruction of the head, I felt the body in my arms grow limp.  After what felt like hours, the baby's head delivered and its lifeless form lay on the bed.  I wanted to cut my losses then, to give up - to clean my nets.  But there was a slow, faint heartbeat still.  Seeing an opportunity to teach newborn resuscitation (but without any real hope), I instructed our nursing students in doing CPR for this baby boy.  In a minute or two, that heartbeat was a little stronger.  I placed a breathing tube while a small spark of hope nestled in a corner of my heart - the corner where so many fizzled out in the past.  But the baby "pinked up", began to move, took his own breaths and tried to cry.  A short time later, we removed the breathing tube and that baby lay resting comfortably at its mother's breast.  A couple days later, they went home to his big sister who had been eagerly waiting for him. 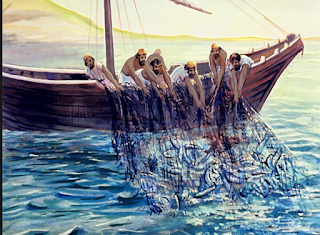 As I make my way through our maternity ward every morning, I must choose to let down the net.  There are days that it remains empty, when it seems like it will spoil.  There are days when perhaps I haven't pushed out far enough into the deep.  Nevertheless, there are days when when it nearly breaks with the new lives that we are part of bringing into the world here at Kudjip.