I don't do a lot of Facebook.  Not because I am against it.  I love that my kids' grandparents can see pictures of their daily lives despite being a world away.  I do struggle sometimes looking at the consumer-saturated culture displayed in the various items marketed on my screen.  But overall I feel we have a good relationship with our social media.

I recently clicked on a link to a popular Christian blogger.  (They have an agents if you would like to "book" them).  The post dealt mainly with parenting in a wholesome way.  What stood out to me though wasn't the content.  It was a picture.  The cover picture of this popular blog shows a pristine bible resting on a table top next to a fountain pen and a mug of coffee.  Two sets of hands rest next to it, one of them bedecked with jewelry and indicating a particular verse.  I think this picture encapsulates something - and I am sure that is the intent.  The embrace and study of God's word.  However, I struggle to make this picture do that for me. 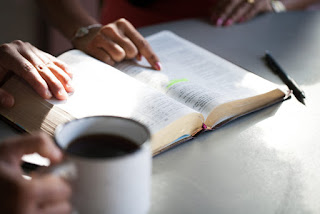 In my high school year book I got one or two snaps outside the typical roster-style photos of my 600+ graduating class.  One of them shows me sitting at a table in a coffee shop with an open Bible underneath my hands held above it clutching a disposable coffee cup.  For those who know me well, they realize that this picture was obviously taken in the latter half of my high school days after I had an encounter with God in the 10th grade.  At the time, I was happy to see that I made the yearbook for something I considered positive.  Now I think back on that picture (I don't even know where my yearbook is) and have to wonder ...

A patient of mine here in PNG came to my clinic room a couple weeks ago, barely able to walk, supported by his friends and relatives.  We will call him Rob.  Rob and I have known each other for a little over two years.  When I first met him he had lost a ton of weight and coughed incessantly.  After a short discussion and blood test, I discovered Rob was living with HIV.  The virus had ravaged his body. Over the next month, though, Rob started medications to control the infection and his family helped bring him back to health.  After staying well a couple years, Rob now looked worse than I had ever seen him.  It was obvious he needed to be in the hospital and have tests done.

Checking his Xray, blood test and cerebro-spinal fluid I disappointingly realized that Rob had central nervous system complications of HIV and I couldn't give him any additional medical help.  I asked the nurses to bring him to the privacy of my clinic room to break the bad news.  Roaches scuttled through some of my drawers, papers were disheveled on the table behind me, a dirty blue drape clung to my exam table and the squeaking wheels of my stool sang incessantly as I made my way to him across the torn linoleum floor.

After telling Rob I had nothing left to give him and I expected he would die soon, I put my hand lightly on his shoulder, feeling every bone and sinew through his wasted frame.  He looked up at me and said, "Doctor - where is your Bible?"  I grabbed it from the shelf.  Rob then led me to a passage of scripture in Hebrews - explaining that if he had continued in his old life he would have already died long ago.  He felt that during his battle with AIDS, God had given him new wisdom and that he could now share this and instruct others.  If he hadn't gotten HIV, he would not have the ability to minister like he does now.  His frail hands grabbed mine and we prayed before he slowly walked back to the ward and likely out my life until Heaven. 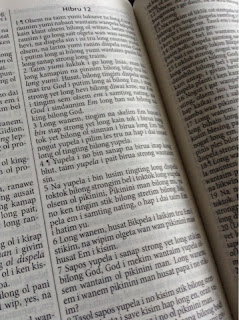 I remember being back home for a few months in 2015 in the fall.  There was a miniature furore over the fact that Starbucks cups no longer carried any Christmas symbols.  Some thought Starbucks was doing away with Jesus and Christmas in general.  As a first-time furloughing missionary, I remember struggling to identify with my home culture.  I had just returned from a rugged land working to bring a little health to those struggling with cancers, HIV, and the many injuries born out of incessant tribal violence.  I thought of patients who taught me so much about life, God and His son, Jesus ... Many of whom were soon laid in the ground for an eternal rest.  All I could think was, "we are looking for Jesus in the wrong places"

For over a week I have been absorbing Rob's message to me.  A message he gave in a busy clinic room peppered with roach droppings and the scattered instruments of a missionary doctor.  He will never have an agent to book him for engagements.  In fact, he will probably never again walk unassisted in this life.  But perhaps he has more to offer than my "Christian" culture appreciates.  Perhaps Rob is where I ought to be looking for Jesus more.

I pray that I will continue to find Him in the dirty clinic, the grass huts of villagers, the bloody emergency room and the hearts of those who, I have discovered, are already so near to Him.