"All those people goin' somewhere
Why have I never cared?"
-Brandon Heath

A couple days ago, when one of Ted's patients deteriorated, his mother's sobs broke aggressively into the routine of examining babies, writing orders, and checking drip rates.  He was admitted the night before with severe acute malnutrition and bleeding, probably from septicemia.  Ted saw him first, changed what seemed the most likely circumstances to try and save his life, but told the mother that most likely he wouldn't survive.

The rest of ward rounds felt surreal, as she sobbed into her baby's bed and Ted and I monotonously gathered more charts and saw the rest of the patients.  After rounds, he went back to comfort the mother and Chaplain Lucy arrived to share in her grief and pray with her. 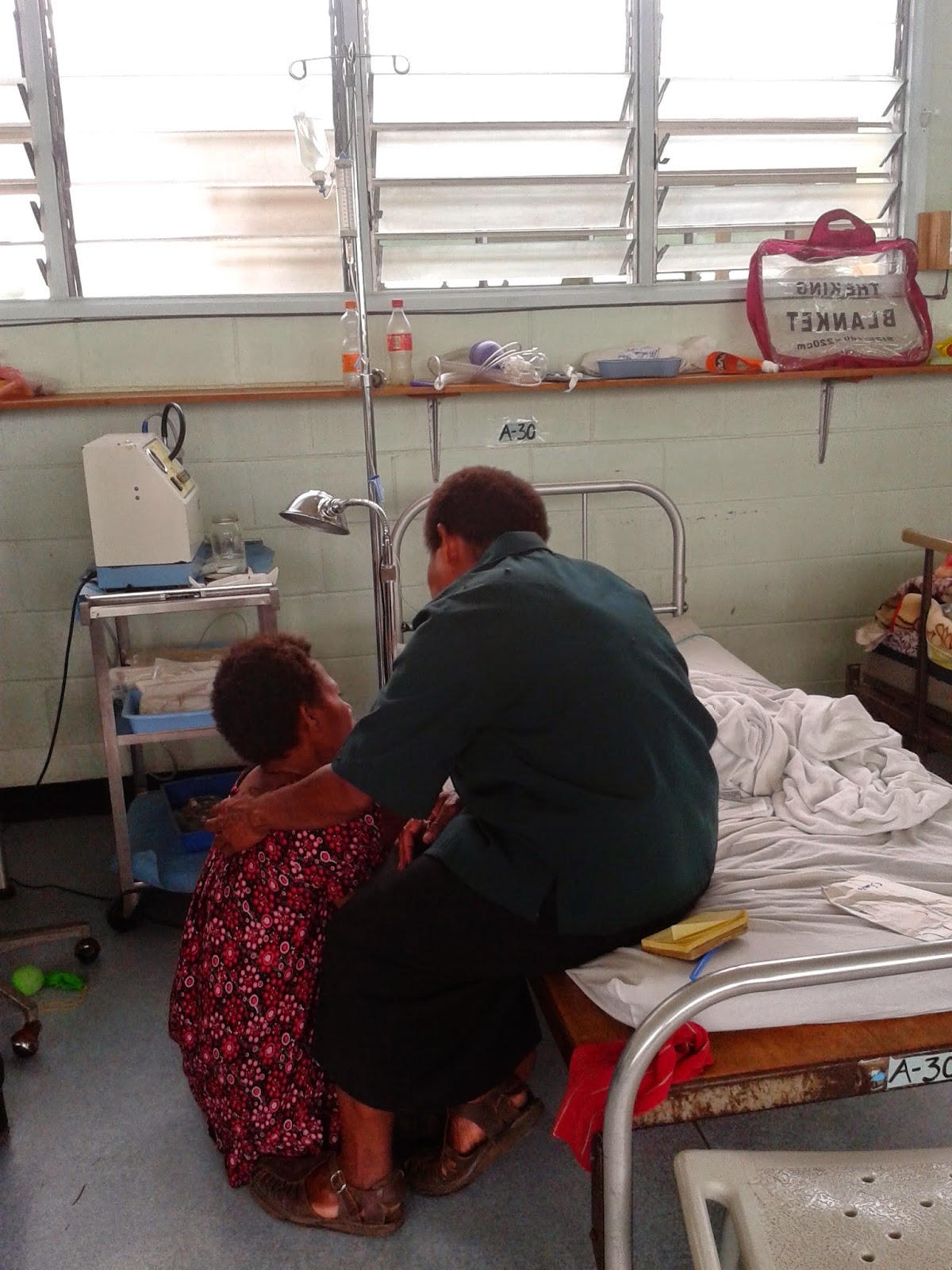 Later in the morning, as the pile of waiting patients' health records grew, I stopped myself at patient number eight for the day.  His book showed the picture of a child, hastily scribbled out with the word "adult" written next to it.  James told me it actually belonged to one of his two sons, and I mentioned he did a good job getting them their immunizations.  James went on to describe the feeling of "fullness" in his abdomen for months.

This bothers me.  In PNG, people may have an illness for a week or two, in which case it is most likely Malaria or some other acutely reversible phenomenon; or they have it "long-time true" meaning it is something which won't kill them.
If someone is sick for "some months" I start to think of Tuberculosis or Cancer, and I pray for Tuberculosis because I have medicine for that.

I took James to our ultrasound machine and my fears were confirmed - a large tumor in the right side of his liver, an extremely common condition owing to the high prevalence of Hepatitis B infection in Papua New Guinea, usually acquired at birth.

We went back to my exam room and I outlined his illness for him.  I told him he had cancer, that I didn't have medicines or surgery to offer him, that his illness would kill him, and that I didn't want him to spend all of his money going to witch doctors promising a cure for him.
James took it all in and asked two questions that took my breath away:
"What did I do that made this sickness happen?"
and
"Will I make my family sick with this?"

What could I say?

What made you sick?  The fact that you were unfortunate enough to be born in a mountainous island country with neglected people and a health system that can't guarantee immunizations to its people.  Instead I told him "Nothing you did made this happen."

Further, having just received the body blow of a terminal cancer diagnosis, James' first thoughts went to his wife and two sons.
"No you will not make your family sick."
"Thank you - I didn't want to go home and make them sick"

I prayed with James, prescribed some medications to help with his pain and nausea and told him to return to me in a few weeks.  After I showed him out and closed the door, I went back to my desk and pinched the tears from my eyes as I prepared for patient number nine.

After a long day full of draining fluid from lungs, lancing abscesses, refilling medications and ultrasound scanning pregnant patients, I was again stopped in my tracks in the late afternoon on patient number 44.

Jim came from another province with a "chronic sore" in his leg.  He walked clutching a stick in his left hand and smelled of infection.  His condition started nearly four years prior and he had been to many hospitals around the highlands.  His sister brought him to Kudjip.

I said he might need surgery to remove some infection in his bone.  Could he come back in the morning for an X-ray when the hospital opens (we had stayed late and our X-ray technician was already home).  His sister explained they were from far away and couldn't make it back anytime soon - could I admit him to the hospital?

At the end of a long day, I wanted to stand firm on hospital policy and I knew that our medical ward had recently been filling up a lot.  I said sorry.  He would have to find somewhere to sleep and return.  In other words, go away.

"Give me Your arms for the broken-hearted
The ones that are far beyond my reach
Give me Your heart for the ones forgotten
Give me Your eyes so I can see"
I went on to patient number 45, the last patient of the day. But halfway through speaking with her, my heart dropped into my gut.  I couldn't focus on what she was saying and the words on her health book blurred a little.  All I could see was an image of my last patient, clutching a walking stick and struggling his way back down the stoney roads - turned away again, in a time of deep need.  The tears came in earnest and I excused myself.

I went quickly to the front of the hospital looking for Jim.  I scanned our patio area and business offices.  He wasn't there.  I checked at the dispensary but, I realized, I hadn't prescribed any medicine so he wouldn't be there.

I had lost him.

But I knew I couldn't send him back to the jungles of Papua New Guinea, simply hoping that he could return for his testing and treatment later.
I went past the emergency room and the outpatient waiting area.  Finally, I saw him hobbling toward the gate to exit the compound, still clutching his stick and struggling to walk.  His sister, Josephine, stood talking to one of the security guards asking about places to sleep, but with a worn expression on her face.

I choked as I told them "Wait - don't go away.  Stay, sleep in a bed at the hospital and see me in the morning for your tests."

"Which was the greater miracle?  The suspension of natural law for the sake of physical healing, or the conversion of the human heart by absolute love?"
-Michael D. O'Brien

The next morning Jim's X-ray showed infection of his femur.  He might get some help by taking an extended course of antibiotics, but I would need to see him in a month and check his leg again.  Josephine and Jim both thanked me and she added "God bless you" in English.  They gathered their things and began again the slow walk toward our security gate, this time with medications and a day to return written into his book. 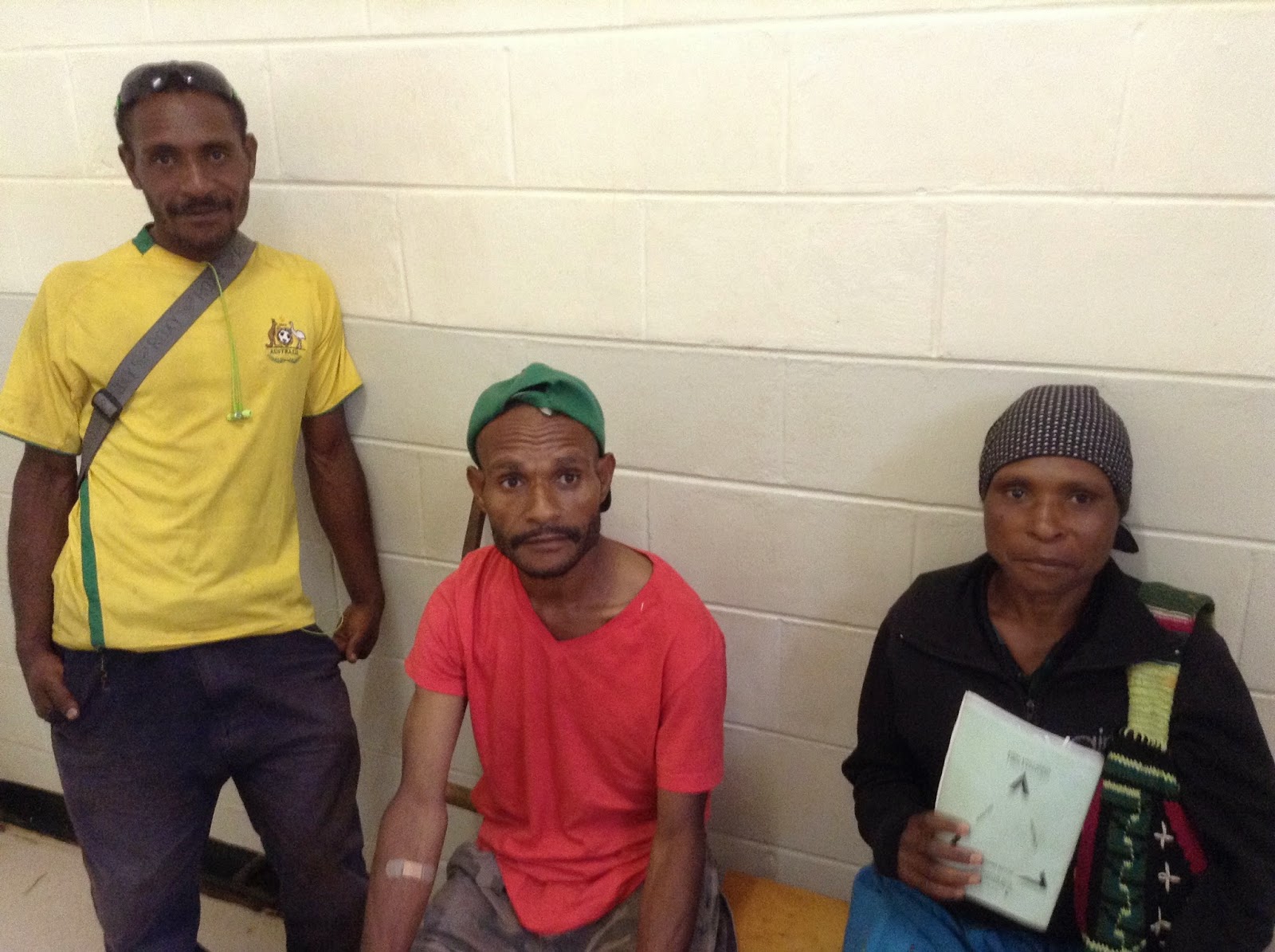 I've seen some miraculous things at Kudjip.  Patients who shouldn't live that were rescued from the brink of death.  Pregnancies or babies that should have been lost but survived.  Patients with Luekemia that received life-saving medications and left cured.
But I've also seen a devastating amount of heartache and physical healing that never came.

I will admit that the thing I'm impressed by the most are the moments in which a human heart is changed.

Sometimes in the patient, like James, who gracefully accepts the terminal cancer diagnosis well beyond their control.  Sometimes in the calming touch of a nurse or chaplain toward a grief-stricken parent whose child dies in the hospital.

And sometimes, painfully, in the merciful conviction of this doctor's heart when my fatigue or frustration would otherwise deprive a suffering person from receiving what small help I might give at the end of a long day.

I know I haven't got enough strength to care for all of PNG.  And at times I long to live and work in a place where doctors have the time, medicines and technology to meet the needs of their patients.  But other times I feel God's impression on my heart so clearly - to show compassion on broken lives in spite of my failing strength.  And then I know the heart that really needs changing is mine.
Posted by Mark Crouch at 1:08 PM