I thought we might have an easier clinic day than most, being Christmas Eve.  Although our patient numbers were down a little, in the afternoon I limped across the line after encountering one patient in particular.

As he made his way toward me, shoulders slumped in a defeated posture, I could tell his face was swollen and his breath was short.  I looked at the clinic book he just handed me with his name printed on the front: Luke.  The same as my twin brother.  Not even in my room yet, I knew I would struggle through this visit.

One year prior I enjoyed reading a book next to a roaring fire in my parents' living room with a beautiful Christmas tree, preparing to move my young family to Papua New Guinea  But Luke began struggling for breath on his daily walks up and down the mountains of his village.  He got medicine from the local aid post, but it didn't help and he went to a hospital a few weeks later getting slowly worse.  Worried about his cough and shortness of breath, they treated him with six months of Tuberculosis medications.  Nothing helped.  Doctors and medicines weren't making a dent in Luke's condition - and he got weaker and began losing weight.

His sister came with him into my room, bearing the body language of someone who has seen countless doctors that couldn't give them a proper answer.  Reviewing his symptoms, looking at his thin but swollen frame and going over his X-ray and ultrasound with Dr Bill, it became obvious that Luke had cancer in his chest.  Not inside his lungs, but outside of them - compressing their ability to expand and breathe and limiting how much blood his heart could pump to the rest of his body.  Luke was dying. 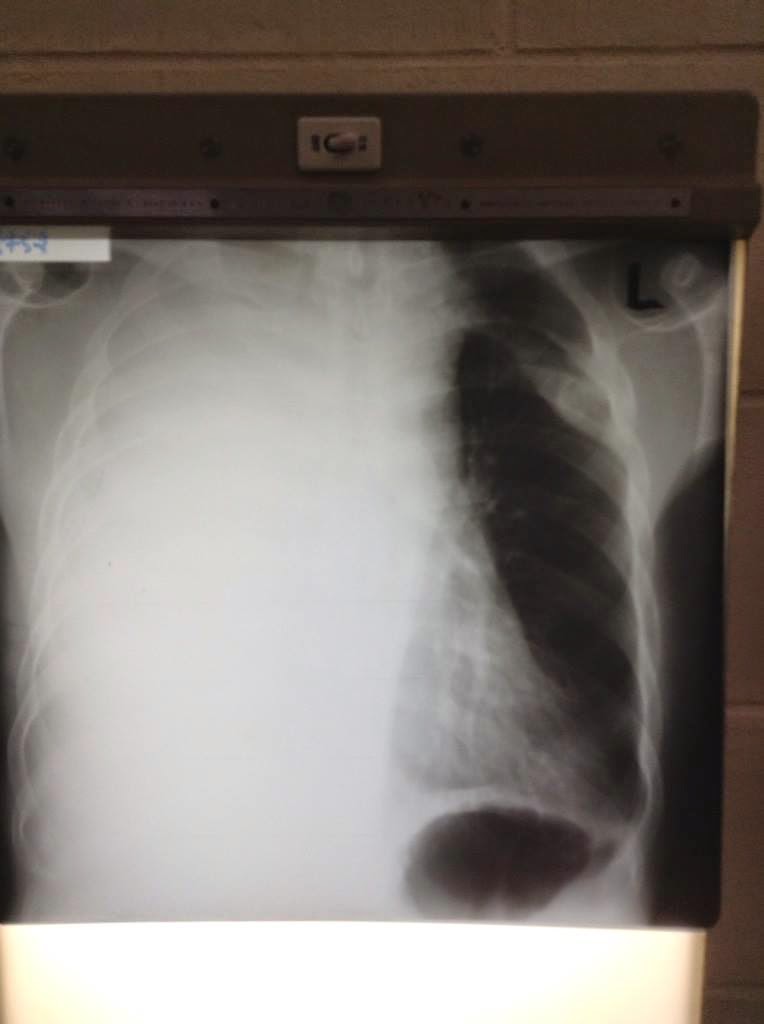 I explained that I couldn't cure him.  I couldn't give a medicine that would take away this cancer and a surgery to remove it would kill him in this place.  Dr Bill might, I said, be able to take away some of his shortness of breath and help him be more comfortable - but it would take several weeks of strong medicine that could leave him weak and tired, or even kill him sooner.  Luke didn't hesitate - he wanted medicine to try and shrink his tumor and maybe help his suffering.

My job in the States at this point involves sending him to a specialist, who then administers medicine in a carefully calculated and controlled fashion while closely monitoring Luke's blood counts and other possible side effects.  In the U.S. he might even get a long shot at a surgery to remove some of his tumor, enabling him to breathe easier and live longer in comfort.  But in this place, Luke gets a little IV fluid and two different kinds of poison injected into his veins, with the prayers and hopes of his doctors that he will return feeling slightly better and not worse. 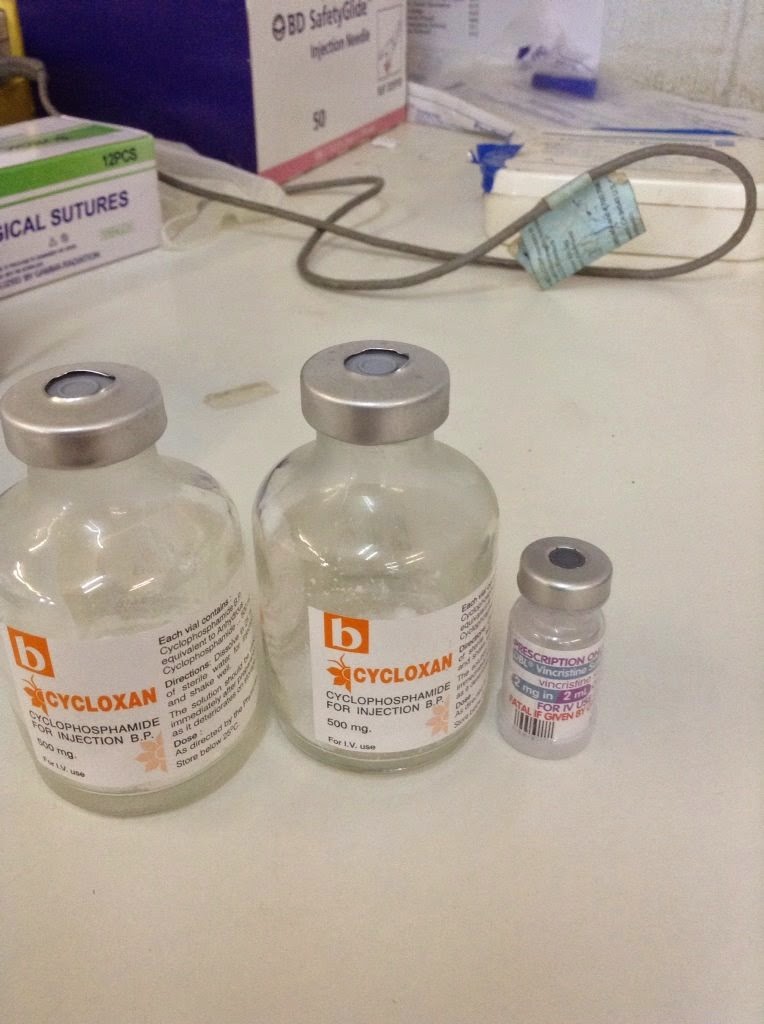 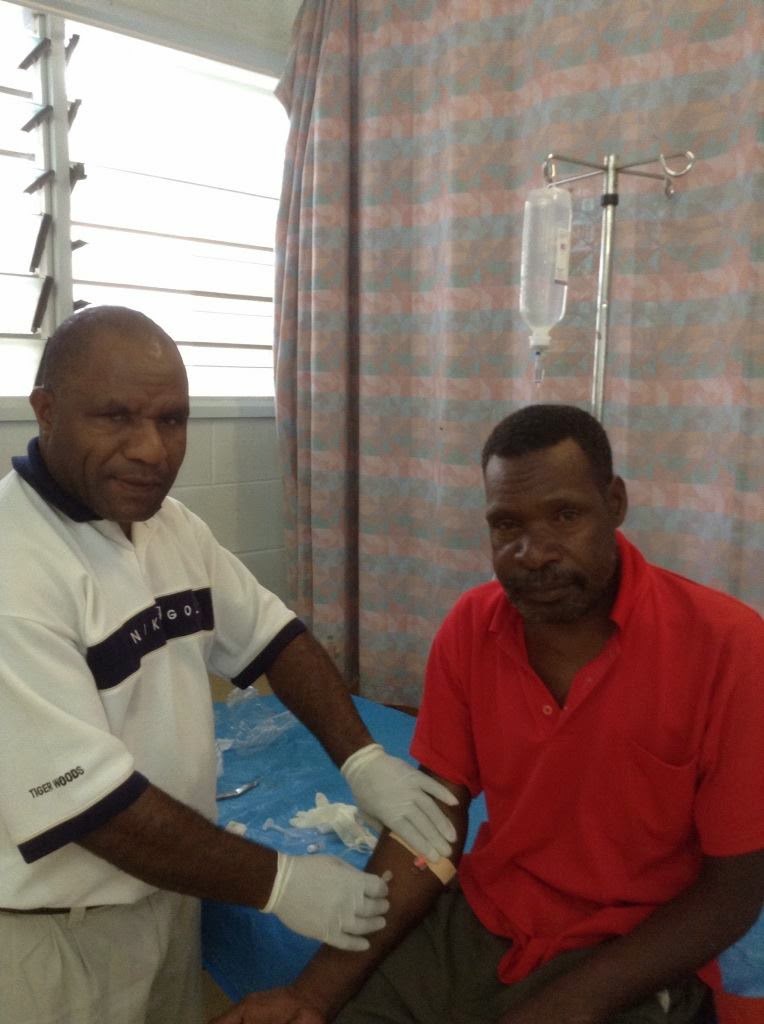 Barimo came to the Kudjip emergency department about one in the morning and our nurse, Mr Thomas called me concerned about him.  I wish I could say I immediately got myself out of bed and up to the hospital - but I did not.  Barimo experienced epigastric pain, but his vital signs were normal so I gave Thomas his admission orders over the phone which he carried out.  "After all," I thought "what could I do differently if I were there?"  I tried to get some sleep after what had been a busy call.

An hour later, Lucy from medical ward calls me to say that Barimo is confused, short of breath and clutching his abdomen in pain.  When I arrived, Barimo looked every bit the heart attack patient, hooked up to oxygen but still cool and sweaty with a thin and thready pulse.  In a brief lucid moment, he shook my hand and said, "Hello, dokta."  I gave him morphine and prepared to give aspirin and nitroglycerin, but his heart gave out first.

I compressed Barimo's chest while Lucy and Simeon, who just returned from taking a patient to the morgue, gave him artificial breaths and adrenaline to no avail.  He died just a few minutes after saying "hello" to me.  As I made out Barimo's certificate, and his family wailed in agony, I reflected on his death.

In the US, Barimo would have received electrical monitoring of his heart, an ECG, admission to an intensive care unit and, most likely, a percutaneous procedure in which a doctor threaded a small scaffold into the artery supplying his heart that was choked off, restoring the blood flow.  He might stay two or three days in the hospital, then be discharged home with medications and activity precautions, probably to live another five, ten or even twenty years.  This kind of life-saving procedure occurs many times a day at my old hospital, which serves a population of about 200,000.  And there are multiple hospitals in Tulsa that could do the same.

Somewhere in there a patient sleeps while getting life-saving care

But for seven or eight million Papua New Guineans, that kind of care might as well be on the moon.
They can't get to a single hospital or doctor with that technology or those skills.

I'm not one to get involved with political debates - free health care, socialized medicine, mandatory coverage, etc.  But how many of those fiercely discussing such issues in the US give a second thought to bringing more healing to the developing world?  It's not perfect, but Americans can get immunizations reliably, clean drinking water at will and emergency life-saving medical care almost anywhere in the country.  But Papua New Guinea can't get a single hospital to perform at that level for its millions of inhabitants?

With so much need and such an imbalance in the distribution of resources needed to combat it, what kind of world do we live in?

A world of peril and promise.

The perils are real and the illnesses are advanced.  The poverty is extreme and the living is hard.  The stakes are high and people are dying.

But some small things can make big differences.  Some hold great promise of health and life for millions.  Like giving the right foods, having enough measles vaccination, keeping babies breast-feeding, or giving care and medicines to AIDS patients.  Every day I participate in these seemingly thankless tasks.

In the hospital, I mostly encounter patients like Barimo to whom help comes too late.  But I believe that the promises of what we can do are just as real as the perils of what we cannot.  Babies are growing, HIV patients are thriving, mothers and their children are living better because of Kudjip's staff and their efforts.  Doctors and nurses who work hard - sometimes sending healed patients back to their villages never to be seen again - but taking bodies to the morgue daily.

How long can that promise keep the perils at bay - and preserve the hope of those combating it?

Please pray for the staff at Kudjip, whose tireless efforts make big, but often unseen, differences in the lives of their patients.