A mountain range lies north of Kudjip station, just across the highlands' only serviceable road.  Beyond the mountains sits a valley filled with tropical jungle and people living in one of the most remote parts of the globe.  The name of this area is the Jimi valley.

Three weeks ago, Beron made the trip from her home in the Jimi to the local aid post for a routine checkup before her delivery.  An incredibly astute nurse, probably working in one of the most remote clinics in the world, palpated (touched) her abdomen and thought that Beron might have twins and they might not be in a good position.  He or she suggested Beron come to Kudjip.


Beron and her husband made the journey over a couple of days, and walked into our labor ward where I met them.  It turns out Beron had twins and neither of them were in a position to deliver vaginally.  I kept her on the ward, gave her vitamins and administered steroid injections to mature her baby's lungs.  Two weeks later, I performed a Cesarean section on Beron and presented her and her husband with two healthy twin boys.  Thanks to the efforts of one nurse dedicated to working in the Jimi, Beron's family is safe and whole. 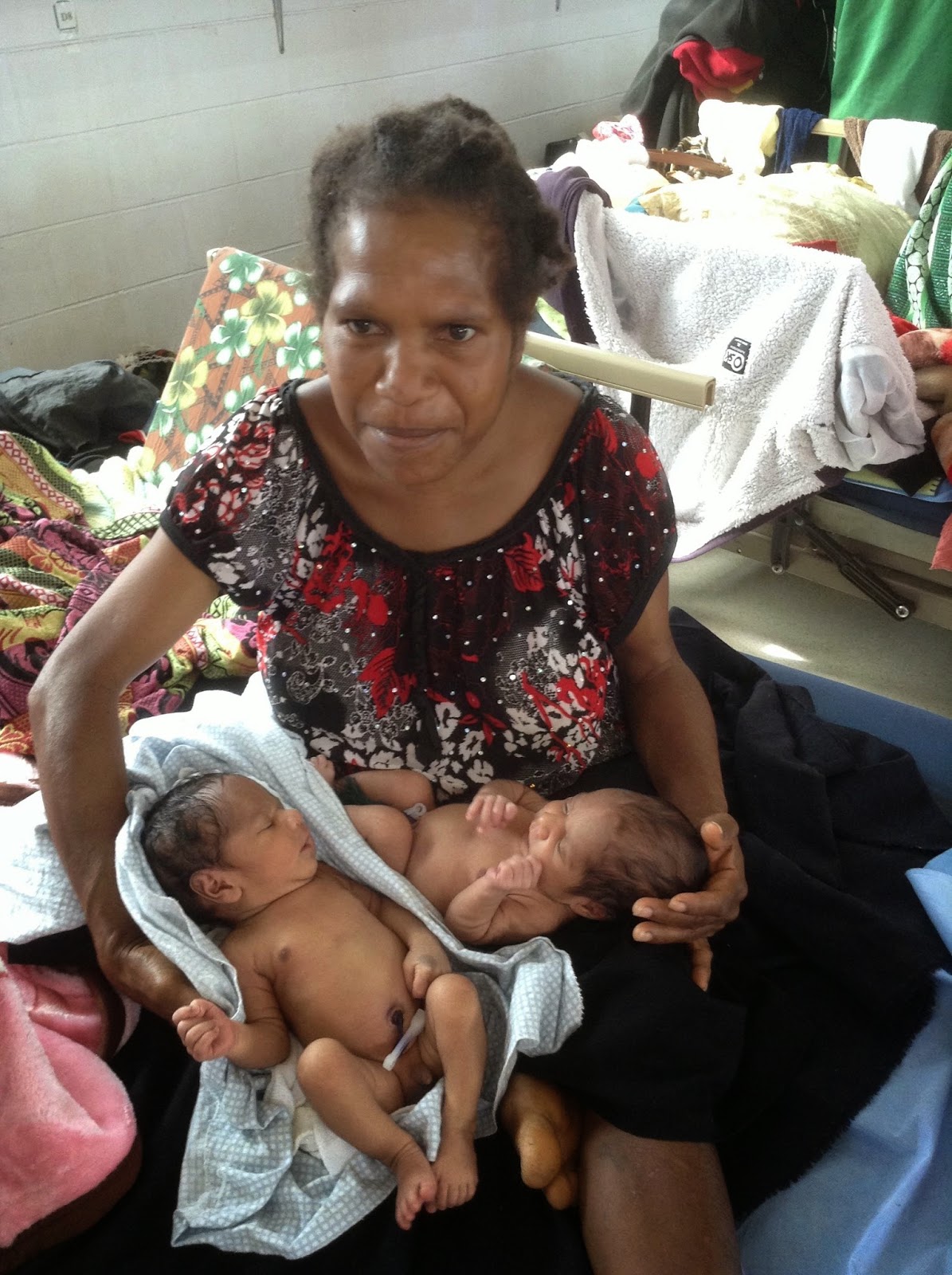 Beron and her twins - Mark & Luke (after my brother and I)

"He will bring justice to the poor of the people;
He will save the children of the needy"

About a week ago, a young lady living in the Jimi, and expecting her first baby, went to the local aid post with contractions.  After several hours, her water broke, but the baby wouldn't come out.  She pushed and pushed but could not deliver her baby.  In fact, not until three days later, after pushing with her body's contractions for almost 72 hours, could she hire a car to bring her to Kudjip hospital.  Her name is Kum.

At the time Kum arrived in Kudjip, I sat in reflective prayer during a Monday morning chapel devotion.  I enjoyed the message shared by one of our staff members but a nurse from the Obstetrics ward summoned me out.  Fighting back my frustration (our obstetric service interrupts me nearly every hour during my day), I went and discovered a very pleasant young woman on the delivery bed - but nearly fell over from the smell.

Kum forced a weak smile as I entered, but her abdomen was locked into a strong contraction creating pain.  A baby's head was lodged in her pelvis, but there was no heartbeat and the ultrasound confirmed that the baby died, probably one or two days prior.

After stabilizing Kum with intravenous fluids and antibiotics, I applied a vacuum extractor to the baby's head, but could not relieve the obstruction of her labor.  Kum needed a Cesarean.  Dr. Kevin Kerrigan, a selfless surgeon volunteering from the US, performed her surgery and delivered her deceased baby.  Kum went back to the ward, surrounded by women with their own healthy babies, to recover from her operation.  But now she leaks urine, meaning she has probably developed one of the most isolating conditions in the world, a fistula.

Lately, my heart has been breaking for the people of the Jimi.  Nearly every day I see women with obstetric complications - bleeding, infection, malaria, prolonged labors, high blood pressures.  But when the nurse tells me, "Doctor, she is from the Jimi" - my heart sinks.

I think of Lavinah, whose baby's arm presented in her birth canal during labor, then died while it took her two days to come to the hospital as her mother suffered from septic shock.  I think of Mana, whose first twin died after being born in the Jimi, and whose second (also deceased) twin wouldn't deliver until I was able to resuscitate her with a blood transfusion and apply a vacuum to the baby.  I think of other patients who arrive too late - with metastatic breast cancers, heart and kidney failure, advanced cervical cancer, or osteomyelitis (infection of the bone) needing amputations.  And I wonder what could have been if they had access to care where they lived, or if they could make it through the jungle to see us sooner.

In short, I think of the graves in the Jimi - many unnecessarily filled by the babies, children and parents of that remote area.  Some graves whose occupants I will never know about and never even have a chance to help.  Some whose occupants I know ... but knew too late.

As difficult as I find it, dealing with the problems of the Jimi, I know that my emotional struggle is nothing compared to that of its people.  I weep over the babies I can't save.  But their mothers spend a few days recovering and then make the long trek back over the same path through the mountains to their bush houses of grass and sticks.  They return to their husbands, who may or may not blame them for losing a child, and have to resume tending their gardens to have enough food to eat or sell or trade.

Where will their hope come from?  Are they condemned to an existence full of suffering and death?
How many more graves will they dig? Mana and Kum's babies died before they ever had a chance to hold them.  Beron's babies both survived and she is recovering well from her surgery.   A long time ago I gave up trying to figure out why things happen like that here in Papua New Guinea.  Certainly I still wonder, and I still get frustrated.  But I choose to look into the face of the suffering here every day not because I know why, but because I believe that God gave me the skills and knowledge I have for a specific reason.  I table my tears, because I have more work to do as I walk the ward.  And though I struggle to prevent my patients' suffering from paralyzing me, I know that I can only help the next one if I keep it together.

I don't ask God why these things happen.  I ask that He would send more and more people like Beron's nurse into the Jimi to care for the neglected people living there.  Slowly, I believe that those living there can receive what they need.  Until then, I pray that I would have strength to save those I can, the heart to comfort those I cannot, and the endurance to do both every day in spite of the numerous mothers and babies who are dying there.
Posted by Mark Crouch at 12:36 AM