After my last call, I was beginning to feel extremely discouraged. The third baby that I admitted who was born prematurely ended up dying overnight, and a 16 year old patient I'd been taking care of since I got here also died in the early morning hours. Needless to say, my Monday was not the most encouraging of days. Tuesday was a new day.

I'm on Pediatrics ward for the next couple weeks, which I find more challenging and a little less stressful. I wasn't able to see anyone leave the hospital, but I did see one patient that I operated on a couple days ago doing a little better. She has osteomyelitis (bone infection) of her tibia and fibula and Dr. Jim and I opened up her leg (for the second time) in an effort to get rid of her infection. She seemed a little better today - but our Xrays were not encouraging. It looks like there is more infection in that leg that will need to come out at some point. The prayer now is that she won't lose her leg.

On the way to the ER, my beautiful wife and daughter came walking toward me. Esther and I went to have a prenatal visit with Dr. Bill, who took an ultrasound of our little one, ETA December 3rd, 2011. Things are looking good for this little one so far, which blesses us tremendously after our challenge during a miscarriage last year. 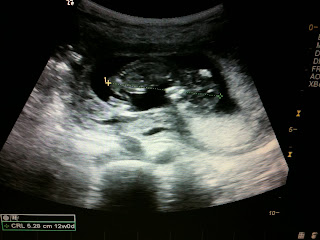 Later in the morning I went to OB ward after the nurse came to get me for a laceration repair. It was easily the most complicated laceration from childbirth that I've ever seen, and required sedation and some pretty involved stitching. But in the end, I think the injury will heal well. Wednesday I had a similar laceration, but again mom did well and was feeling better today.

After lunch Tuesday, I saw several patients in the OPD (outpatient department) including a very weak looking young lady. She had been to several doctors over the past 2 years because of generalized weakness, body and joint pains and losing weight and stopping her monthly menses. She had been tested for HIV, Typhoid, Malaria, and had an ultrasound scan of her abdomen for cancer of an unknown source. In talking with her, her diagnosis seemed impossible, but for the fact that she woke up every morning dreadfully thirsty. Our one and only test in the clinic that afternoon involved 3 seconds of checking her blood sugar - 561. This patient probably has untreated diabetes leading to weight loss and emaciation. That made for a small victory in clinic, she is now getting a little better slowly with insulin injections in the hospital. 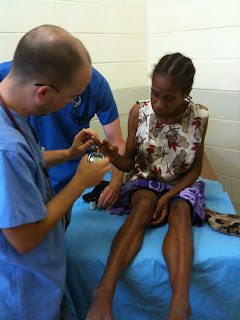 This patient was 20 years old and weighed 32 kg (about 80 pounds)
Tuesday night we had dinner with Erin, Becky and Tiffini - a visiting PA student here. It is great to spend time with people our age and get to have a good time joking together. It makes this place feel that much more like home - but we are definitely missing our friends and family there.

Wednesday I saw several patients in the OPD after peds rounds. One couple was coming for infertility - though they had only been trying to conceive for 2 months. There is pretty significant pressure culturally to have children here, and the father wasn't happy with the idea that it might take up to a year to conceive. I also saw a lady with bacterial meningitis in the ER and did another LP with Dr. Bill. Her CSF studies came back today mildly concerning for Tuberculous meningitis, which I pray she doesn't have.

Another Csection Wednesday with a baby that came out looking quite distressed. After our day Sunday, I didn't think I could stand another baby dying. This child wasn't breathing and, again, Dr. Stephanie resuscitated the baby while I worked on Mom - a little less chaotic than the last one, though. Baby turned the corner quickly and went to our nursery. Thankfully, prayers were answered and the child looks great so far. 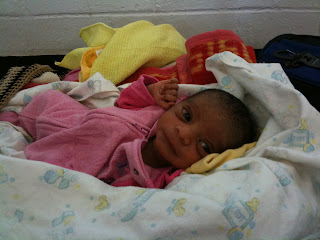 One of my C-Section babies - doing well
I'm on call tonight again and may have more pictures and stories for tomorrow and this weekend.
Posted by Mark Crouch at 5:09 AM