My last day was a bit more relaxed. I had a big moment of weakness in the morning, though. As I went to collect Xrays and lab results I heard some commotion in the emergency room. Dr. Jim was already giving instructions, including some instructions on collecting resuscitation equipment. I knew he could handle whatever happened in there, so went on to my pediatrics ward. In full honesty, part of me couldn't stomach the idea of seeing another ill-fated resuscitation to start off my last day at Kudjip hospital. I rounded fairly quickly in the pediatrics ward, knowing those would be the last patients I saw the next morning.

I saw a little boy named Nixon. This was the second time I laid eyes on Nixon, and both have been miraculous. He is about 10 years old and was helping to push a broken down vehicle a week ago when he fell, the vehicle rolled and (according to bystanders) went over his lower back as he laid belly down in the dusty road. When we first saw him, I couldn't believe this story. He had some back pain, but no evidence of serious damage, and was able to walk out of the emergency room with some tylenol as his only treatment. Friday I saw Nixon in our outpatient department. His back was a little sore, but he was walking fine and had no major injuries evident in followup. I assured his mother that God had something for this boy's life because he should probably have died from his accident and came away without any serious injury. 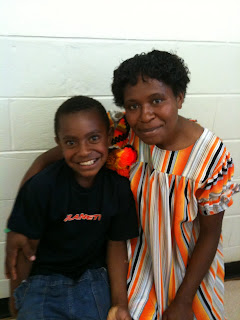 I spent a bit more time the outpatient department on that Friday. There was the usual assortment of complaints, and the occasional trip the emergency room to cast a bone, sedate a patient for the nurses to drain an infection, perform a procedure, etc. Oddly, none if it felt dissimilar from any other day there. I found myself more comfortable in that environment. I could see patients largely without a translator. I knew where supplies were. I knew what treatments were available. I even knew how many pediatric beds we had in case a very ill child came in and needed to be admitted (and one did). A stark contrast to my first day at Kudjip.

Dr. Erin casted a broken bone in our orthopedic room. I noticed afterward her giving instructions to the patient's "wasman" (watchman). This is very common, but it is not common for the wasman to be a small child. It caught me off guard and I took a photo. The wasman is extremely important at Kudjip - they bring the patient in, get the instructions on how to care for them, give medicines, etc. They also care for the patient's hygiene and meals if they are admitted to the hospital. It struck me that this little boy was taking on such a big responsibility. But the children here grow up quite a bit quicker than they do at home. 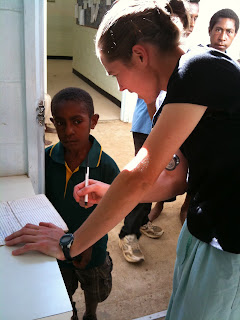 I saw a few final patients in the ER and got to do my last Kudjipian Csection before heading home for dinner. I was on call in the evening but only made a couple of trips to the hospital. One stood out. I met an elderly man who seemed extremely frail and, even in my limited Pigin, slightly demented. His family complained that he had been coughing and losing weight for months and left the hospital only 2 weeks ago (in a remote area) with no improvement. We couldn't admit him to our hospital, but within a few minutes I could tell this man was dying from heart failure. I told the family my thoughts, gave him some additional medicine to help him breathe better, and let them take him home, most likely to die. As they left they made a comment to the nurse that the "white" doctors were smarter and knew more than the other doctors. I thought two things about this. 1) It isn't true. The PNG physicians for the most part, if our Registrar Raymond was any indication, are on par with the medical knowledge they need to treat the illnesses they face. 2) There is a grain of truth in their concerns. Many patients come to Kudjip unaware of how sick they truly are. They will be told repeatedly at government clinics or hospitals that their surgery is just around the corner, the specialist will see them when they are here next week or that their illness has been treated and they can go home. They are very rarely told, it seems, if they are dying. I don't have a solution to that issue, but I do know that this family was almost relieved to hear the honesty of even a fatal diagnosis.

I went home and slept until the next morning with no additional interruptions. I rounded in the pediatrics ward on Saturday morning and walked back home a little more keenly aware of the uneven stones in the road, the smiling faces scattered around the street despite another body being added to the morgue that morning, the beautiful tropical mountains covered in cool fog all around me and the sense that my work wasn't over. Even though I had my bag, my water bottle, and my surgical shoes packed up from the hospital, I couldn't help feeling that it wasn't really the last time I would put my hand to work at Kudjip. We have a lot of reflecting to do on our time there, especially as we consider what God has for us next. But something about the people, and the place itself, makes me think that we'll be there ... and back again ... sometime. 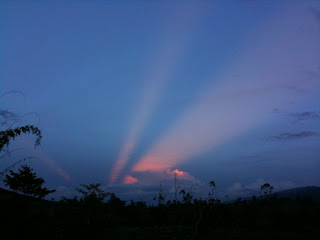