"As we walked through fields of green,
it was the fairest sun I'd ever seen.
I was broke, I was on my knees.
You said yes as I said please"
-Mumford & Sons
"Dokta Mark - we need you in the O.T."

"Auntie" Margret has worked at our highlands mission hospital for about forty years.  Why I hesitated when she called is beyond me.  I had a rough night, had just turned in my thesis and was preparing for a brief nap before going to our high school to teach.  I wasn't on call and I knew we had surgical back-up at the hospital - why was I being summoned?

"Dokta Daniel needs you - we have a complicated C-section and she is pouring out blood."

I felt a bit of a jolt of adrenaline, grabbed some scrubs and made my way up.  Why did I delay when a colleague needed me?  I have been that position, too.

Throughout the past year and a bit, the demands on our mission doctors escalated dramatically.  We shouldered more and more - chops, trauma, difficult obstetrics cases, tropical disease - without the usual supply of volunteers to ease the load.  Funding issues weighed us down as well.  Over time, every call from the hospital felt like another straw on this camel's back.  We were down to the bare bones and were carrying the same the load.  Though I felt moments of immense satisfaction during that time, it left a scar.

"I have no strength from which to speak - when you sit me down and see I'm weak."

Then earlier this year, multiple prayers were answered.  Doctors arrived - some for a few weeks, some who have moved here to join the ministry and bolster our depleted ranks.  Two new PNG doctors joined us to serve and receive training.  I remember distinctly: for the first time in months, I went to our clinic and tried to use our ultrasound machine but there was another doctor using it that I needed to wait on.  I teared up while my patient and I waited - I'm sure she was very confused.  It felt like a renaissance.  Now, the load is much the same - but the shoulders of those lifting it are broader in number and united in community.

Our surgical resident was busy in a bowel resection when I got to the hospital, so I urgently made my way to the operating room where Daniel was having trouble.  I almost instantly teared up again at the sight that met my eyes.  Another colleague had received a similar summons and arrived ahead of me.  She was scrubbed in helping Daniel.  Three young physicians who had responded to God's call and the world's crushing needs were diligently working to save a mother's life.  Dr. Daniel, Dr. Laura and Dr. Spencer had each served at Kudjip for a brief time in the past as students or residents, and all joined us this year in the midst of one of our greatest seasons of need.

As I looked around them into the operating field, I could tell that they were making progress in a good direction.  I didn't scrub in.  This woman's trouble, her very life - which would have been another agonizing call just a year ago - was in the capable hands of three new doctors who now shouldered the weight of this ministry with us. 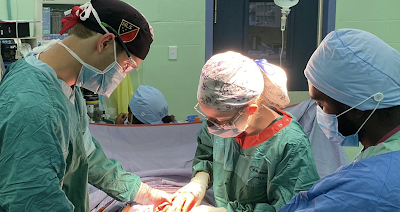 For more than a year and a half, our little rose bush has struggled.  It is long and spindly and still growing but has produced nothing but thorns for a while.  There had been times that I felt we should just dig it up and get rid of it.  Why a rose bush that only made thorns?  Earlier this week, as Esther and I walked down the road in the evening she pointed out a new bud that was just beginning to open up.  As I admired a blush of pink petals pushing their way through, I noticed three smaller green buds that would soon turn this thorny plant it into a florid tapestry.  All that time, there was a life beneath the thorns waiting for an appropriate time to bloom. 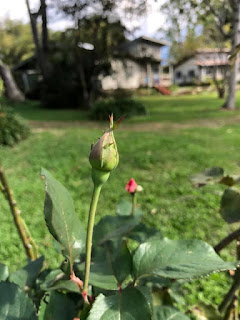 There are thorns everywhere without a rose in sight.

But I realize that there is a difference between laboring to see God's redemptive work in the world in a patient way and hastily pushing through my own agenda on my own strength.  One could tear out something of great potential.  The other could bring impressive beauty from a seeming heap of ashes.

You will heal our scars,

Sadness will be far away.

Do not let my fickle flesh go to waste,

As it keeps my heart and soul in its place.

I will love with urgency but not with haste" 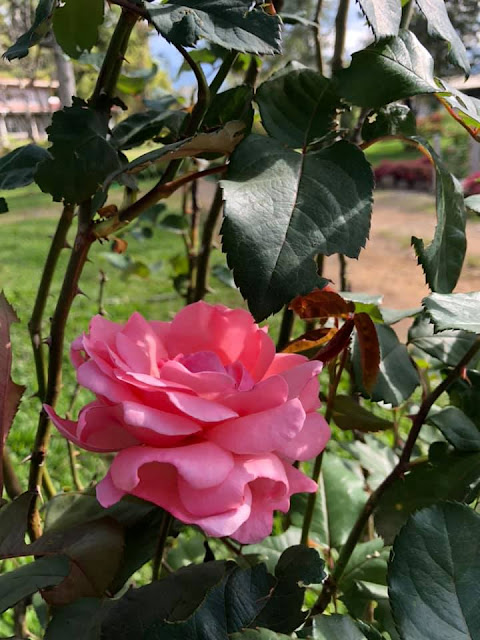