"Keep my eyes to serve, my hands to learn."

-Below my feet, Mumford & Sons

My colleague, Dr. Dave, approached me as I concluded my rounds on medical ward to get some guidance on a lady who had just come from the Jimi valley.  After just a few words I knew we were in trouble.  I wrapped up seeing my patients, made a few notes for the nurses, and prayed with our team before going down to the maternity unit.

In Labor Bed 6, a pale and nearly lifeless woman breathed fast while Dr. Dave oversaw nurses placing IV lines and starting antibiotics and then went to notify our surgical team that we needed the theatre ready urgently.  Her unborn baby had become obstructed in the uterus.  After strong contractions for a day, a hand and the umbilical cord presented through the birth canal and the baby asphyxiated.

"And all I knew was steeped in blackened holes."

As a blood transfusion was prepared and nurses placed a foley catheter, I asked where the woman's husband was.  They had just arrived - having traversed some of the most hazardous roads on the planet - and he sat nervously on bed D-5, the only man in a sea of young women and speaking only a little of the lingua franca, Tok Pijin.

I explained, as best I could, that his child had died inside his wife's womb and that she was also in significant danger of dying as well.  "Mi laik karim i go katim na givim chance we em bai inap laip yet" - "I want to do an operation on her to give her a chance to live."  He agreed and the team prepared for surgery.  I went back to her bed and uttered a hasty prayer - "Papa, giv stea long mipela inap ken sevim laip long dispela mama" - "Lord, guide us so that we can save this mother's life." 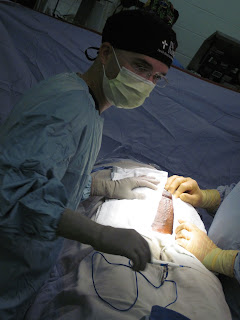 Our hospital has been operating with a "skeleton crew" of doctors for nearly a year.  The usual supply of volunteers has dried up thanks to  COVID restrictions on travel, and our dwindling physician work-force has been stretched.  We have poured sweat and tears into this work and wearied ourselves.  Thankfully, God's grace has continued, and our doors have remained open to the sick and hurting in our highland jungle - whose daily miseries continue.  I have asked myself where the ongoing strength will come from.

"I was still, but I was under Your spell.

When I was told by Jesus all was well - so all must be well.

Just give me time.  You know Your desires and mine.

So wrap my flesh in ivy and in twine - for I must be well."

Dr. Sheryl opened the abdomen and a large haematoma presented itself to us.  The uterine artery on the right had dissected creating massive blood loss.  We quickly removed the deceased baby and set to work stopping the bleeding and removing the severely damaged uterus.  Each clamp and stitch needed to be placed quickly but appropriately while blood was being squeezed in by our anesthetic officer.  After a diligent operation, the monitors showed the heart rate lowering and the blood pressure rising.  She returned to the ward to recover - while her deceased baby was wrapped up by our nursing staff to await one of Papua New Guinea's many under-sized graves. 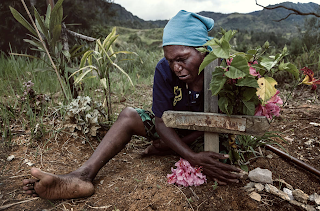 Near the tail end of clinic that day a young woman walked toward my clinic room.  Her gait and girth told me we needed to stop short of my exam room and we detoured to the ultrasound machine.  As she lay on the table I glanced through her record book.  An astute nursing officer in a health center at one of the corners of our province felt that this first-time expectant mother might have a baby lying sideways.  With the potential ramifications of such a dangerous condition fresh in my mind, I scanned through her abdomen and discovered that she was, in fact, in breech presentation - also a dangerous condition, especially for a woman who has never given birth before.

We went to the maternity unit - to the same bed on which my dying patient lay so recently - and I gave some intravenous fluids and an injection of medicine to relax the muscles in her uterus.  Using the ultrasound machine to guide me and check on the baby, I was able to turn her little one into the cephalic or "head-down" position.  After thirty minutes of monitoring they both appeared well and I sent them home with instructions to come back and check the position of the baby again in a few days.

"Keep the earth below my feet.

From my sweat my blood runs weak.

Let me learn from where I have been.

Keep my eyes to serve, my hands to learn"

We don't know when our world will open up again.  News about vaccines emerge and it seems life may get "back to normal" soon.  But "back to normal" for the majority world doesn't mean family gatherings, the Olympics and movie theaters.  It often means a continued struggle against the majority killers.  Please pray for the health workers of the world - that we might continue to learn and serve and be well.